This is a rare post indeed, a post that does not mention food at all (although I guess it has mentioned it now!)… yes in fact this post is all about our second favourite thing, drink!

Now I don’t find myself out in town on a Friday night that often anymore. We’re usually holed up in the kitchen cooking for an event or testing recipes. Anyway when I do get let out I’m always keen to try somewhere new and exciting, and Leeds’ ever changing bar scene had some venues I was keen to try.

The evening started at Angelica, which apart from its stunning views, is a place that can be missed out quite frankly. We found some of the staff aloof, cold and hostile, which left a bad taste in the mouth. The venue would be much better suited to a fun and colourful Wahaca-esque margarita bar, so we took our money elsewhere.

We ended up in the new Dish on Boar lane. Readers will know that we are keen supporters of this exciting Leeds independent and we were thrilled when they made the move to a bigger space in the old Anthony’s. I didn’t get down to the restaurant this time but the bar was open and welcoming so we settled down for a few. Dish has a modest selection of innovative and creative cocktails that have been created inhouse. First off we opted for the smoked negroni and the smoked Amaretto sour. The negroni is by far my favourite all time drink and it was hard to know how they could improve upon it, but they did. The spirit is smoked on metal trays over woodchips and is then put back into the bottle for use. It imparts a deeply earthy and savoury flavour which was a great pair to the bitter sweetness of the drink. Wha’ts more it came complete with a bubbling and smoky inferno of dry ice. This was fun but did leave me paranoid that I’d rot my insides if I drank the wrong the bit, I appear to still be alive today. 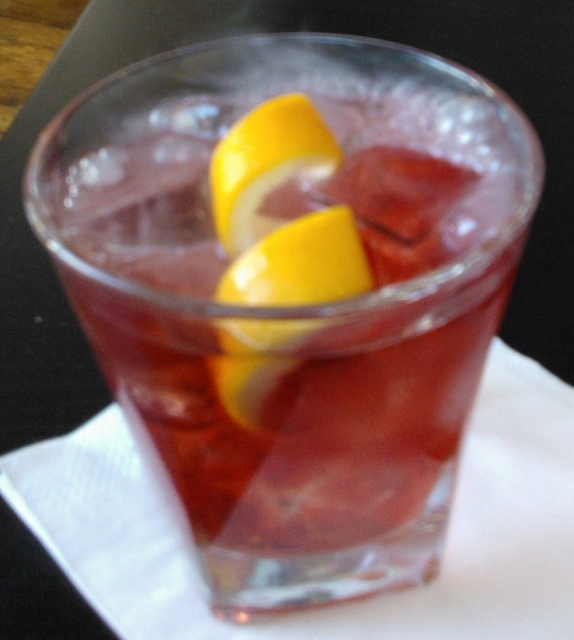 The Amaretto sour was similarly savoury and did not have the usual cheek puckering sourness or sickly sweetness, it was perfect and modern.

Next up we had a Barcelona and a Botanical jam jar. The Barcelona is called as such as it has aimed to translate the Spanish city into a cocktail. This was a very grown up drink of various rums served in a champagne saucer with a cherry. This drink puts hairs on your chest – my kind of drink. The botanical jam jar was based around lavender infused gin combined with lime marmalade and a whole allotment full of herbs such as rosemary, thyme and basil. This was a bit too aromatic for me but was still a beautiful drink. 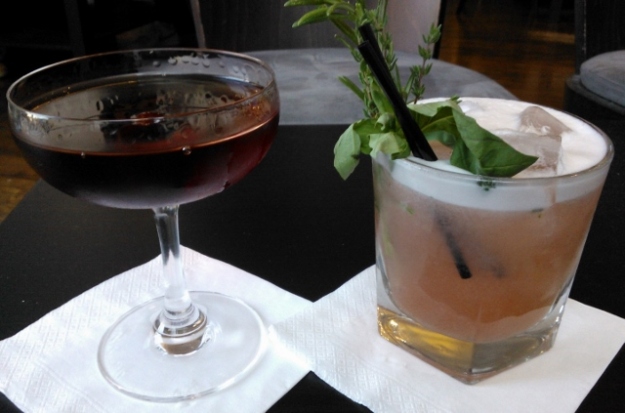 Dish are piloting a 241 deal on all their £7.50 cocktails, so we had all that booze for around £20! Having said that we had no idea that this offer was on until we came to pay so I think a bit of better marketing could be done here to entice more customers in.

I’ve said it before and I’ll say it again, we need to support our independents like Dish. The food and drinks they produce are top quality and very exciting. The staff are passionate and this shines through in the wares they serve up and the welcoming atmosphere they create. So next time you’re in Trinity and you want a nice relaxing drink – give Angelica and the Alchemist a miss and cross the road to pay Dish a visit, you won’t regret it. Although I’ll regret telling you all this now as I won’t be able to get served so quickly!

Check out Dish at – http://dishdining.co.uk/

This weekend saw Dinner at the Manor launch into another Middle Eastern Feast! We’ve run a few previously, using Ottolenghi as our tome. This time we took inspiration from Lebanon and used the beautiful Lebanese Kitchen by Salma Hage as our guide for the evening. We love Middle Eastern flavours and playing with spices and we were looking forward to sharing some unique dishes with our lively bunch of guests. The weather was on our side this weekend and the sunny weather was reflected in the food.

We kicked proceedings off with a zesty apple, mint, lemon and ginger cocktail – the base for this was Dan’s homemade lemonade, spiked with spicy ginger and topped up with apple juice and vodka. A real refreshing drink to get those tastebuds ready for the rest of the meal.

The canapes were a trio of tasty morsels. We had to get some falafels on the menu and this time we whipped up a carrot and cumin variant. In its raw state the mix seemed very different to the ones we served up at our Ottolenghi event, very wet in texture, but once fried they were soft yet crisp, offset nicely by the sweet pumpkin hummus and toasted pumpkin seeds.

END_OF_DOCUMENT_TOKEN_TO_BE_REPLACED

What do you buy the man who pretty much has everything? That’s the dilemma I have every year when it comes around to Dan’s birthday. I’ve given up on kitchen kit and books, and have to having fun days that revolve around our favourite obsession. FOOD!

So this past Friday we finally got to go to Winteringham Fields as a (very!) belated birthday present. Situated just outside Scunthorpe, the restaurant is owned by Colin McGurran, who we’re slightly in love with! Fans of the Great British Menu will remember that he won the starter for the Olympic banquet last year with his “Quail in the Woods”. What struck me is that his food seems to be a fusion of classic flavours but then executed using very modern techniques.

END_OF_DOCUMENT_TOKEN_TO_BE_REPLACED

It seems like forever since our last event – we’ve probably seen the back of Summer but then again our first Autumn event brings cuisine from the more exotic climes of the Lebanese Republic.

We’ve based the event on Salma Hage’s Lebanese Kitchen – a huge book on all things Lebanese and I have to admit it took us a while to finally agree on the menu. We love Middle Eastern cuisine and can’t wait to cook up a feast for our guests. Let’s hope they love the menu as much as we do!