We took a trip to the chilly climes of Scandinavia for our first afternoon tea of 2015. Using Trine Hahnemann’s beautiful book ‘Scandinavian Baking’ as our muse, we served up an array of filling and tasty Northern European treats. Baking has seen huge success in the UK of late, partly thanks to Bake Off, and Trine is keen, through this book, to demonstrate the baking heritage found in Sweden, Denmark, Finland and Norway. 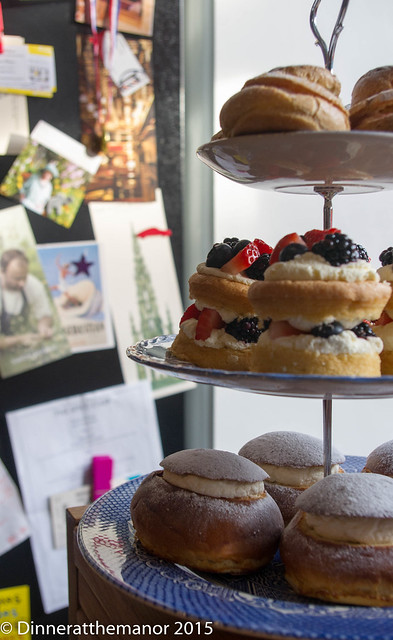 A veritable smorgasbord was put on for our guests, which consisted of savouries and open sandwiches. Our open sandwiches included our very own homemade rye bread. We had a bit of a nightmare with rye if we are honest! The starter was temperamental to say the least. Mine failed to ferment and bubble alive, Susie’s did but then it didn’t rise the dough! Needless to say we persevered and were able to serve bread on the day. It’s a long process making rye bread (24-36 hours for proving) but despite the length of time required it’s actually a simple bread to make as it requires no kneading at all. We ‘cheated’ by chucking a teaspoon of yeast in, which seemed to do the trick! I made a classic rye and Susie made a seeded, malted rye – both chewy and full of flavour. Our toppings were classic Scandinavian fare – I went for a salt beef with horseradish cream, pickles and red onion. Susie went for a smashed avocado with prawn and quail egg. Our top tip for buying rare and organic flours is Shipton Mill! 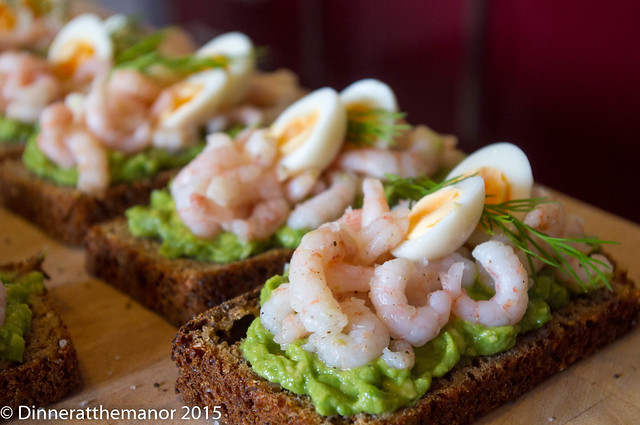 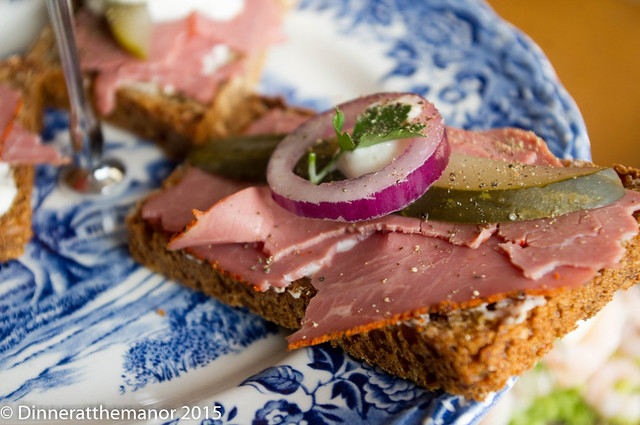 Our other savouries were Susie’s little sausages rolls, but instead of pastry, they were encased in kale pesto and chewy onion bread. Think mini hotdogs (which the Danes are crazy about!) and you’re about there. I opted for a tart which came complete with a spelt crust and then filled with home smoked salmon, spinach and asparagus. The spelt pastry was a revelation – easy to work with, flexible and forgiving, it didn’t need any resting either. Essentially it is wholemeal spelt flour mixed with fromage frais! The result is not the shortest of pastries but it’s very pleasant so I’ll be making again. 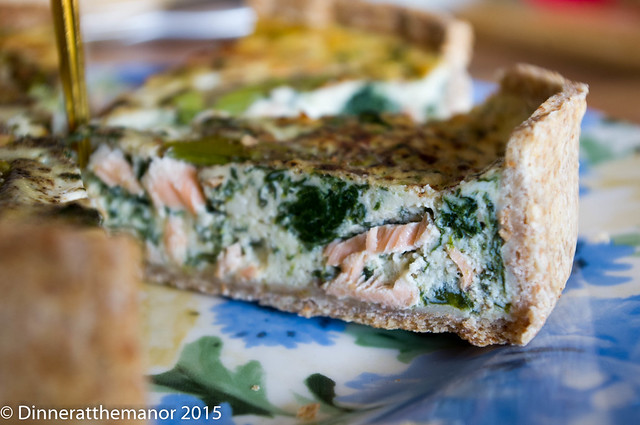 A quick interlude followed where we refreshed our guests’ pallettes with a spiced winter berry sorbet. This gave us time to set the cake tiers with our cake offerings. It was only as we were doing this that we realised we were serving up not one, not two, not three but four different cakes all filled with lashings of cream – woops!

I had made semlor, which are little marzipan cream buns that are traditionally served in the time period between Christmas and Easter, so very apt! These were very fun and satisfying to make. They start life as a dough made from Italian pasta flour. I was worried this might be quite a tight dough but it was actually lovely and soft and supple. It rose beautifully and once rolled into balls and glazed with egg, yielded beautiful golden buns! These were hollowed out and stuffed with homemade marzipan. I did find with this recipe that it wasn’t as sweet as my taste buds liked so I did throw a bit more sugar in. To enhance the almond flavour in the marzipan I added some amaretto. The buns were finished off with a dollop of amaretto doused cream and a dusting of icing sugar. 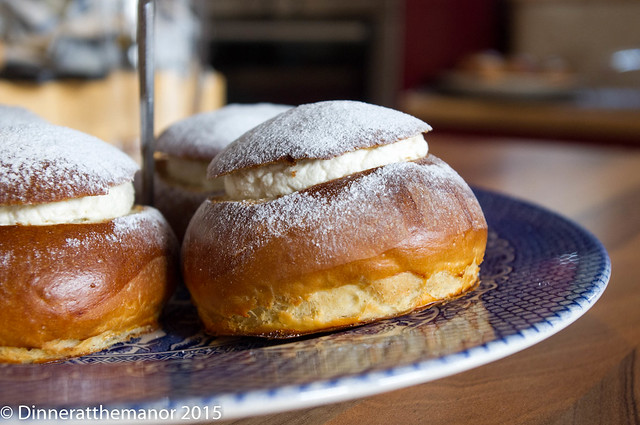 My other cake was a walnut macaroon cake. This is an interesting take on a coffee and walnut. It’s gluten free because the cakes are made of only egg whites, ground walnuts and sugar. These are then sandwiched together with cream flavoured with coffee and brown sugar. Again, I didn’t find this sweet enough, but maybe that’s just me and my Americanised taste buds?! I was also disappointed with the chocolate ganache topping. My instinct was telling me to chuck some cream in (Trine only uses chocolate and butter) but I didn’t. The result was a very hard topping that then made the cake impossible to cut neatly! Next time I shall definitely add that cream in! 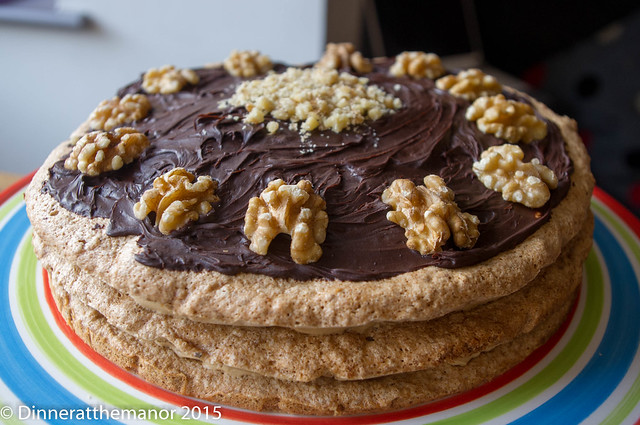 Susie’s cakes included little crispy choux buns filled with a Yorkshire rhubarb vanilla cream. Rhubarb is roasted with sugar and vanilla until soft,then folded into cream. We saved the rhubarb syrup for cocktails later! The last cream filled cake was the hilariously titles Fru Pigalopp cake, (that features on the cover of the book) named after a character from a Danish series of children’s books. Susie’s mini versions were probably a more dainty svelte version! These were individually sized genoise sponges, filled with whipped cream and berries. A Scandi take on a Victoria sponge! 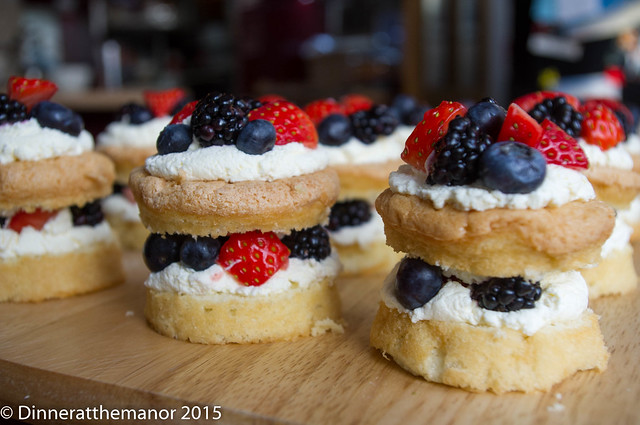 So all in all another successful and enjoyable afternoon! I am a bit sick of the Scandinavian baking book now, however there are tons of recipes that are tempting me to try them so once I’ve had a rest I’m sure I’ll be going back. It’s a beautiful book with stunning pictures and there’s recipes for all kinds of level of cook. On the whole the recipes are accurate and work (well apart from the rye bread, but we won’t go there!)

We’ll next be back in April, after a short break, for our Persian event, so see you soon!

A quick heads up supperclub fans! We have picked our new dates for April and May 2015 and they are now on sale. The events will be as follows, click on the book now links below!

April’s event will be a Persian themed 6-course dinner (£35pp) in honour of our fellow superclubber Sabrina Ghayour who is hanging up her supperclub apron shortly. She’s hit it big with her cookbook Persiana and we love cooking from it so will be showcasing recipes from it, to show what a great and accessible book it is! Sorry,this event is now fully booked

May’s event will be an American themed afternoon tea. Think big, sweet, creamy, rich and filthy and you’re halfway there! This daytime event will be £20pp. Sorry,this event is now fully booked

We’ll have other events on sale soon, so keep your eyes peeled!

Where does time fly? We’re already in February and next weekend see’s us play host to twelve hungry guests for our Scandinavian afternoon tea. Using Trine Hahnemann’s beautiful book, Scandinavian Baking, we’ll be serving up delicious rye breads, a smorgasbord of tasty toppings and some beautiful pastries and cakes to boot, all served from our vintage china!

Have a nose at our menu and let us know what you think!