Last weekend we went completely vegetarian. We always aim to cater for all dietary requirements at the Manor but we like to put the veggies first every now and then. I used to be a veggie when I was a student so I don’t really feel like I’m missing out if I don’t have meat. I think these days vegetarian food has a much better reputation, helped by the exciting flavour combinations people are prepared to experiment with – as demonstrated by the likes of our foodie friends at Swine that Dines. They do a monthly veggie small plates menu where I’ve eaten some of the best food of my life. 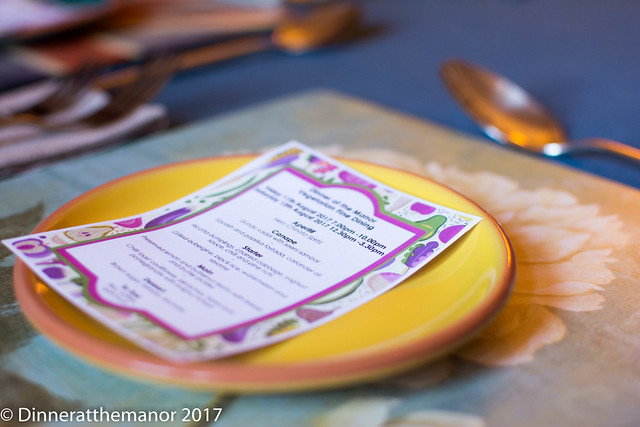 Flavour is probably the most important aspect of cooking for me, and so we picked a menu that would showcase some strong, spicy and unusual flavours, all in veggie form. In fact most dishes were actually vegan or could be made vegan by omitting the minor dairy elements. People seemed up for it as well, at least two thirds of the crowd were not even vegetarian!

Susie got me a spritz book for my birthday this year and so I’m slowly making my way through it at each supperclub, as the recipes produce such lovely, refreshing aperitifs. This month I picked a Nero Chinato spritz, which was muddled blackberries, cocchi and prosecco. Very late summer inspired! 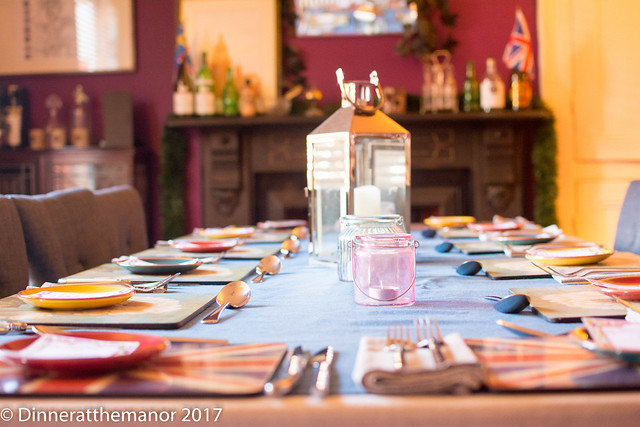 Our canapes started our veggie tour of the world, the first being ullunde vadi – Sri Lankan street food inspired by my recent travels. These chewy little lentil doughnuts came stuffed with a punchy, sweet and sour onion and chilli relish. Then it was onwards to Mexico with a smoky butternut squash tostada. A crunchy tortilla topped with spicy paprika spiked squash, topped with pink pickled onions and coiander oil. 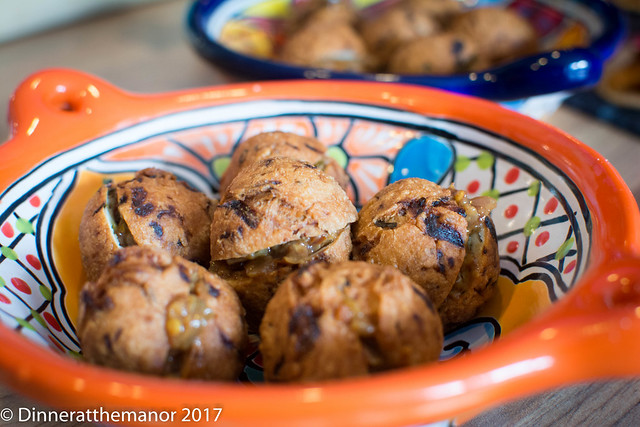 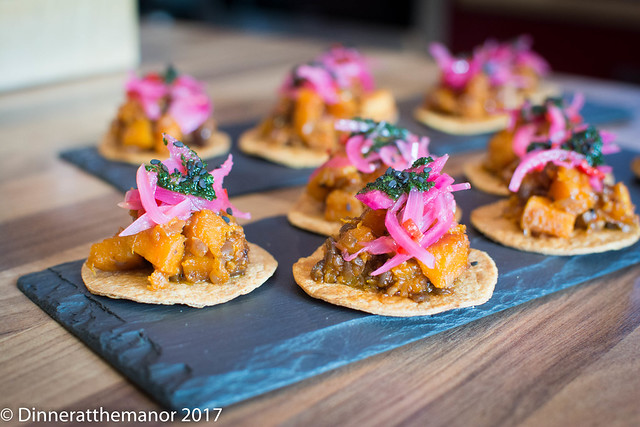 Next on our culinary tour was Turkey. We’ve said before how our current food obsession is Selin Kiazim of Oklava and so I was keen to test a recipe ahead of our Oklava themed event in October. Ricotta stuffed dumplings came paired with a charred wedge of cabbage, a naughty yoghurt and cream sauce, chilli butter and toasted pinenuts. The sauce could essentially make anything taste nice and the spicy chilli butter cut through all the dairy richness. 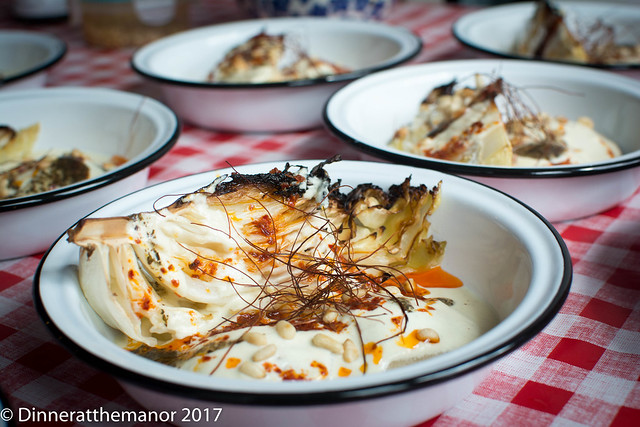 Next was a detour to Asia via Greece with a real fusion of a salad consisting of black rice, aubergine, watermelon, feta and sesame! Black rice and griddled aubergines were tossed in a salty, umami miso,ginger and lime dressing and then topped with feta, watermelon and a chilli sesame caramel brittle. The salty savoury flavours were washed away by the watermelon, leaving you ready for another mouthful. This combination sounds bonkers, but our guests seemed to love it! 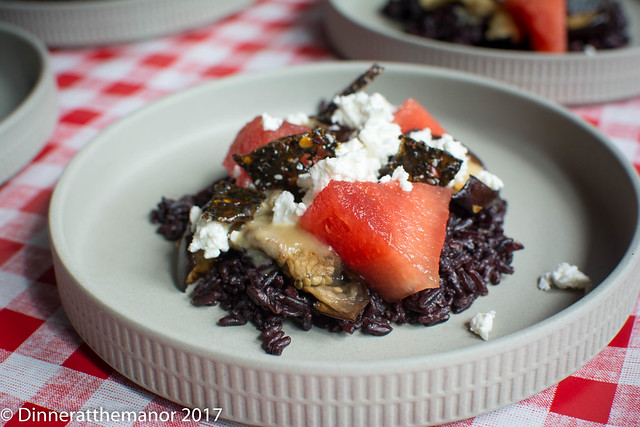 My Middle Eastern take on a risotto was up next and was packed full of unusual flavours including sumac and preserved lemon. This was topped with little bread and butter pickles, made from tiny Turkish cucumbers. The tart little pickles cut through the creaminess of the risotto and provided a lovely crunch against the comforting softness. 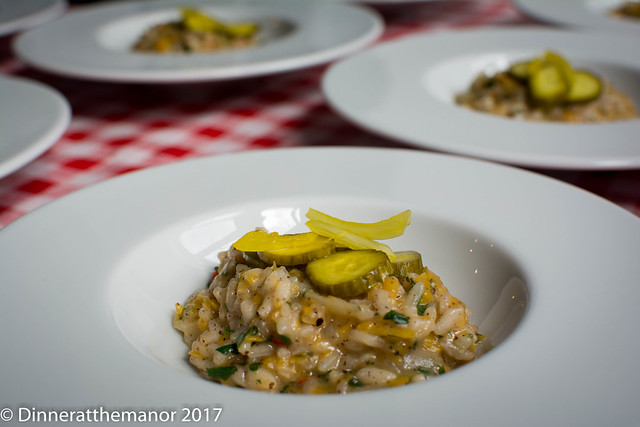 We stayed around the Middle East for Susie’s take on another of Selin’s recipes – chilli roast roast cauliflower. Smeared with sweet and spicy Turkish pepper paste, the cauliflower was roasted and charred and then topped with a tahini sauce, pistachios and pomegranates. A herby bulghur wheat salad accompanied. Roasting cauliflower really brings out the nuttiness of the vegetable yet retains the bite. 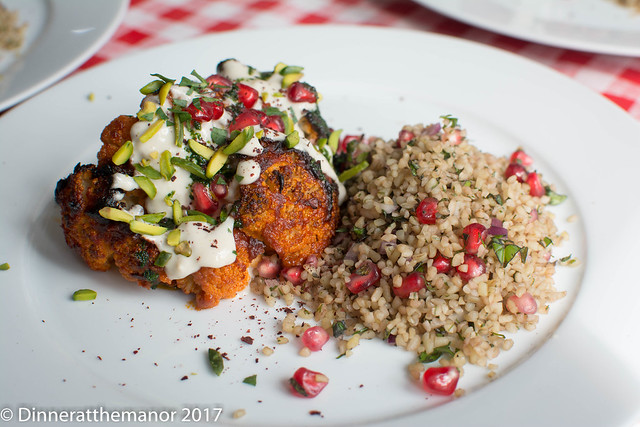 And then it was back to the UK for dessert – using a dessert recipe from Edinburgh’s Mark Greenaway. Mark’s recent book ‘Perceptions’ is full of complicated Michelin starred recipes, most of which I will never try. However the dessert section is very colourful and appealing and he breaks down all the steps in a (fairly) accessible way. I tried out the brown sugar cheesecake, bramble sorbet and tomato caramel. This was a beautiful little dish full of unusual flavour combinations. The brown sugar cheesecake was creamy and light and with a touch of butterscotch; the bramble sorbet full of summer hedgerow flavours; and the tomato caramel surprisingly fruity and zesty. It was a bit of a labour of love, but worth it! 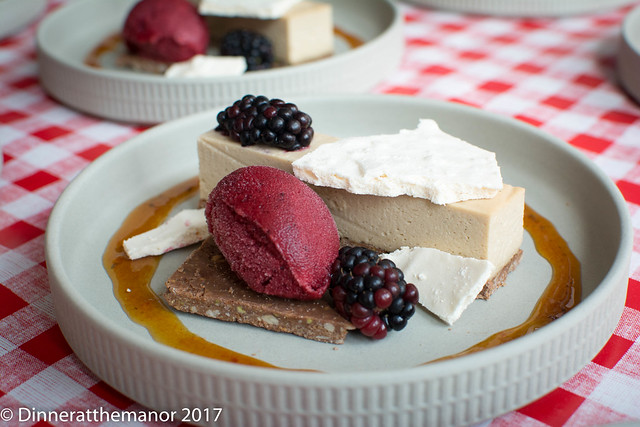 And so we proved vegetarian food can be as exciting and fulfilling as anything else, we certainly didn’t miss the meat! Next up is our Scandinavian double bill at the end of September, where we will probably be welcoming in the start of Autumn. You’ll also no doubt have seen that we’ll be taking a wee break after January so that Susie can go on maternity leave (not my baby I hasten to add!). If you’ve managed to book on to our last round of events, then well done! If not then keep an eye on the blog and on twitter as we’ll advertise any cancellations as they arise.

As promised, here are the links you can use to book onto our next run of events

Ok, so I know Summer’s not over yet but we thought we’d be super organised agree some dates and themes for autumn and winter as we’ve had a number of emails and messages asking when they’ll be. This will be the last run of events before a short break, as I’ll be busy popping a baby out in early 2018 but we’ll be back in the Spring!

Anyway, back to the events! If you do want to book on, tickets will be on sale from Tuesday 8th August at 7pm.

October 27th & 28th – 6th Birthday, inspired by Oklava
We’ve got a bit of a crush on the amazing Selin Kiazim who owns London restaurant Oklava. Some of you will know her from this year’s Great British Menu where she won the dessert round. Using her book Oklava as inspiration, we’ll be bringing Turkish Cypriot cuisine to our little part of West Leeds!

November 18th – Ottolenghi afternoon tea
We’ve held a number of Otttolenghi inspired events across the years and they’ve always been some of our most memorable, for good reason too! His laid back style is really an ethos we like to share at the Manor. This time, we’ll be using his upcoming book, Sweet to bake up a storm for our guests at afternoon tea!

December 8th & 9th – Rick Stein, Mexico
We’ll be bringing a touch of Mexico to our festive celebrations in December! Inspired by Rick Stein’s forthcoming TV series and book, we’ll be cooking up one of our favourite cuisines to our lovely guests.

January 13th 2018 – Olia Hercules, Kaukasis Lunch
Back in Jan 2016 we hosted our first Olia Hercules inspired event, using her wonderful book Mamushka to cook up some wonderful dishes from Eastern Europe. Next year we’ll be doing the very same, serving up a delectable lunch using her new book Kaukasis to take our guests on a journey from Georgia, Azerbaijan and beyond!

So, if these events get your tastebuds flowing, then make sure you’re ready to snap them up on tomorrow!

Next weekend we’ll be hosting two events and taking on vegetarian cuisine as our theme. We’ve taken inspiration from as far afield as Sri Lanka, Mexico, Turkey and back to Scotland to create an eclectic but what we hope is a memorable event!

Back in mid July, we kicked off our summer run of events at the Manor with a French feast to celebrate Bastille day. We wanted to bring some familiar French classic flavours, but with a twist. We didn’t base the whole supperclub on a particular book, but many of the dishes did come from the likes of Rachel Khoo and Rick Stein. 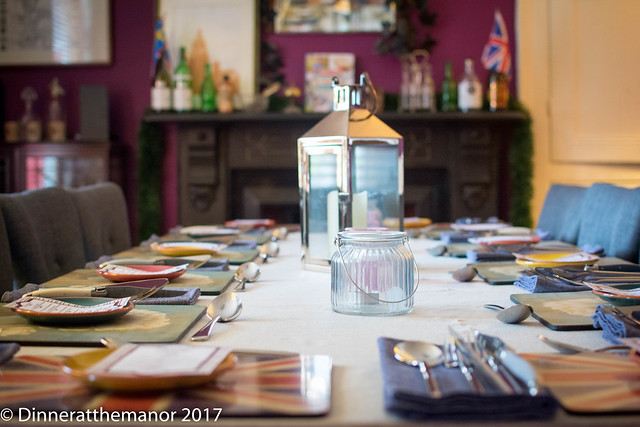 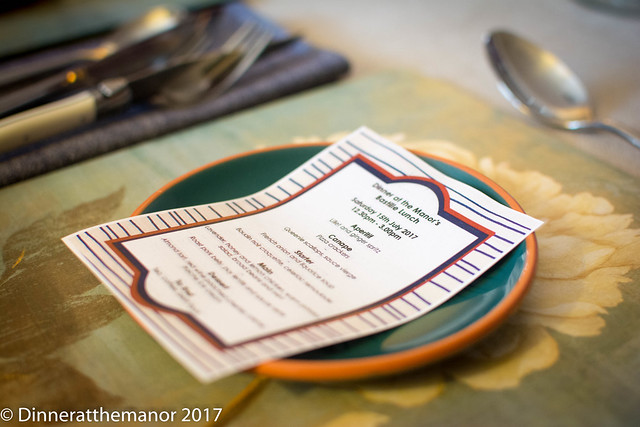 Guests were welcomed with a refreshing Lillet and ginger spritz. Lillet is a French vermouth, quite sweet, tangy and floral. This longer drink came with lemon, basil, preserved ginger and sparkling water – very refreshing and tasty! Our canapés included  “pizza crackers” – mini cheesy shortbreads topped with slow roast tomatoes. The second canape was a delightful combination of queenie scallops and a zesty sauce vierge. The sweet scallops paired well with the tang of the tomatoes and the saltiness of the capers in the sauce. 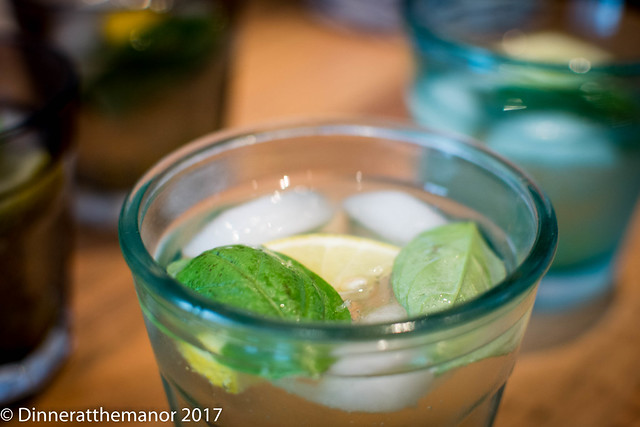 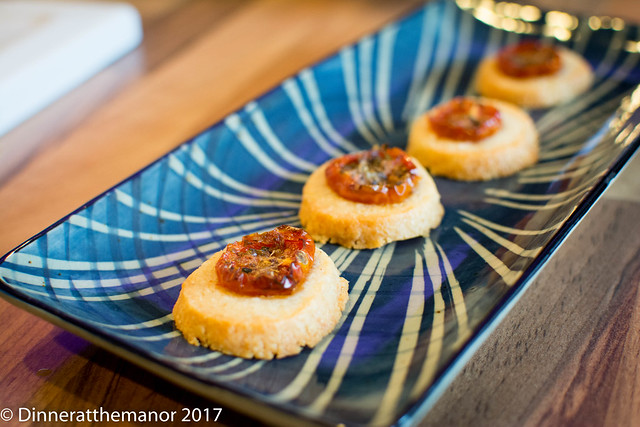 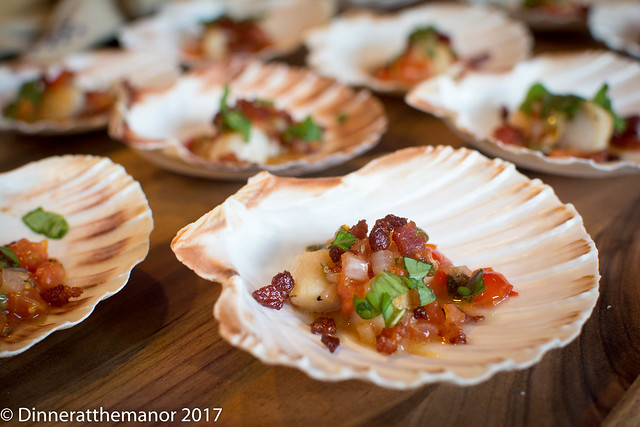 The first starter was a French classic, onion soup – but with a twist! This version came with at least five onions (white, spring, shallots, garlic, pickled) and the slightly unusual addition of liquorice. The liquorice was not over powering but gave a smooth, salty, aniseedy finish to the rich soup. This was followed by a boudin noir croquette with celeriac remoulade – essentially a celeriac coleslaw made with creme fraiche and lemon zest, which cut through the soft, salty richness of the black pudding nicely. 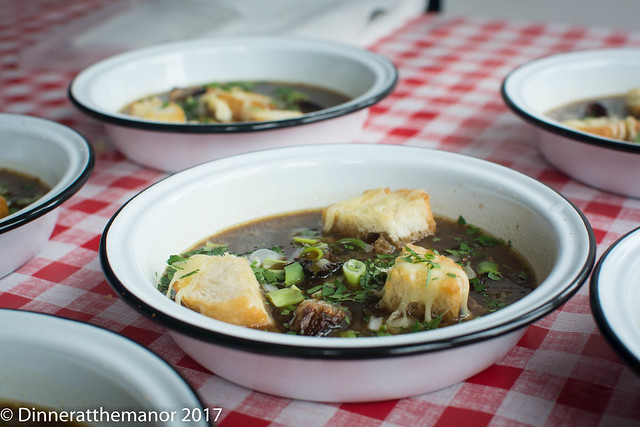 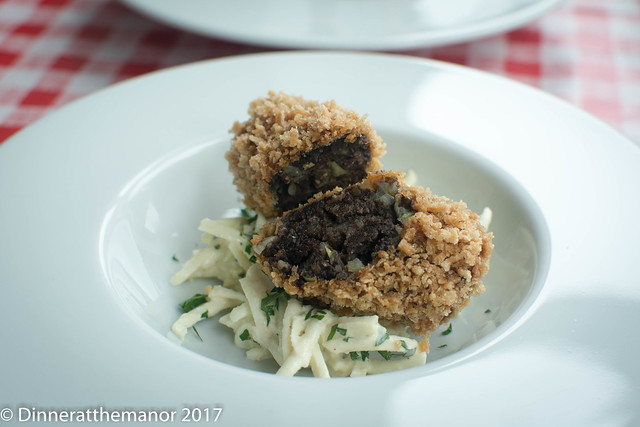 Onto the mains, which started with a delightful dish of lavender, honey and lemon chicken. Floral food haters need not fear, the lavender was not flowery at all – and the chicken was marinated in a fair bit of it! In fact it imparted more of a deep, smoky flavour. The chicken came with a warm, mustardy potato salad and freshly podded broad beans. 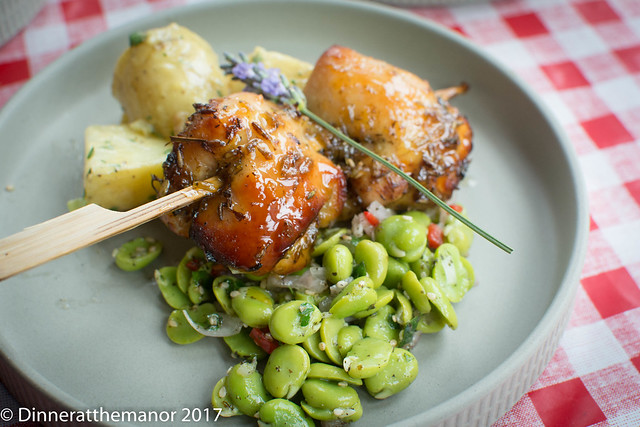 The second main was a hearty “peasant” style dish of crispy pork belly, lentils and a sauce verte. Another hearty dish, with the soft and crisp belly, bacon and wine rich lentils cut through with a herby green sauce of parsley, capers, anchovies and mustard. 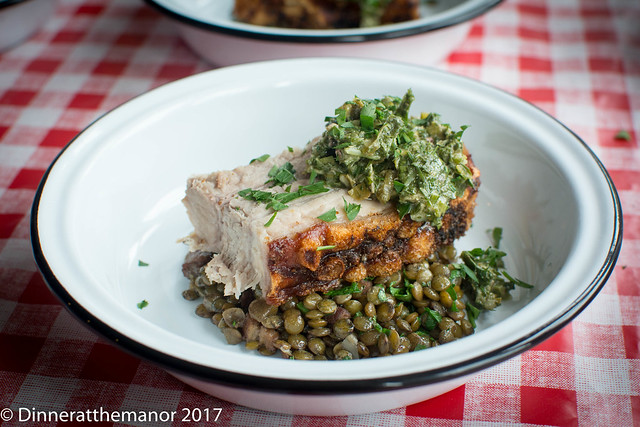 Hopefully our guests weren’t too full by the time we got to dessert, which was a sweet, nutty and crisp almond tart paired with merlot poached cherries, creme fraiche ice cream and toasted almonds. 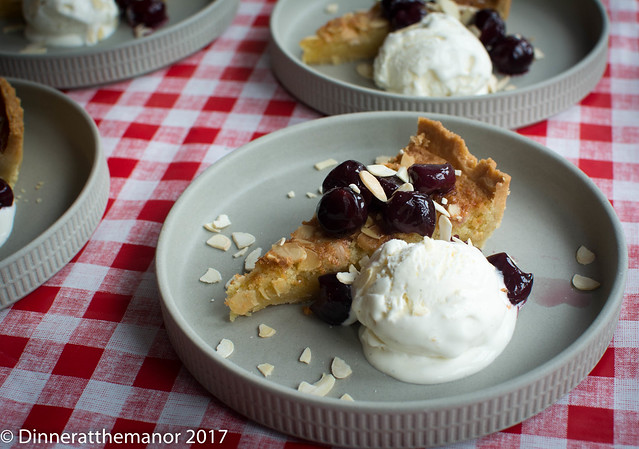 Our final flourish were the petit fours which were home made caramels spiked with warming spices and sea salt crystals. 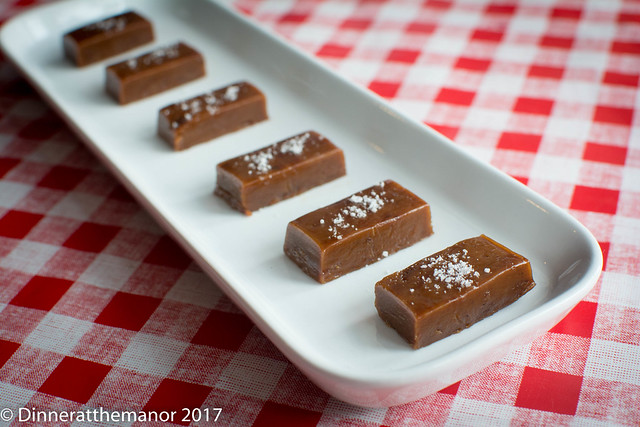 The was an enjoyable and laid back event to kick start the summer, with a wonderful array of guests old and new having travelled as far as the US! In a couple of weeks we’ll be hosting our vegetarian fine dining events. We’ve pulled together our menu and all it’s very exciting.

Also, we’ve just about agreed on dates and themes for our autumn / winter events for 2017 and they’ll be on sale soon…Get in quick as I’ll be off having a baby, so a short break, before heading back into hosting in Spring 2018!!