No sooner have we hosted our January event, we’ll be welcoming our February guests into the Manor for our Latin American Lunch. We always enjoy this type of cuisine. The bold zingy flavours really waken up taste buds!

Inspiration from Peru, Argentina, Columbia and beyond will make this a memorable feast, so here’s the menu!

Our first event of 2016 took us and our guests on a trip to Eastern Europe. This is a cuisine we’ve not really featured at the Manor before, but there are obvious influences from the rest of Europe with the use of ingredients such as dill and beetroot and lots of meat! We used Olia Hercules’ hit book ‘Mamushka’ for our inspiration. This book won countless awards last year and was heralded for bringing Eastern European peasant food into the public realm. Mamushka is all about celebrating the strong female characters that formed part of Olia’s upbringing and inspired her to cook herself.

The book is indeed beautiful, with lots of lovely pictures to demonstrate what the food should look like. We found some of the recipes a little too simple as we’re used to stronger flavours, so we do admit to having a little play about with the recipes to adapt them to our palate a little more. 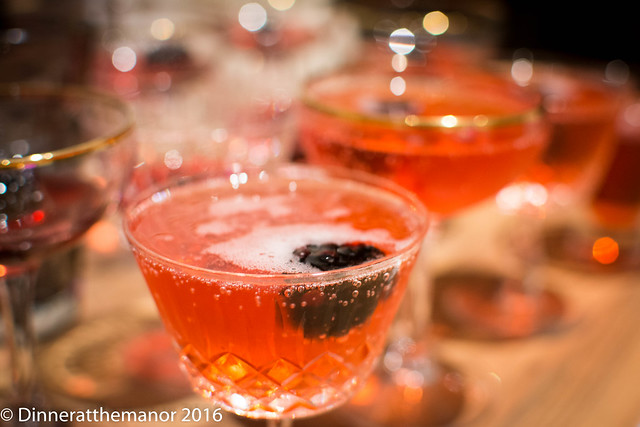 Our welcome cocktail this month was a pretty little hedgerow fizz. This paired our homemade sloe gin with sparkling wine, blackberry juice and topped off with a fresh blackberry. The canapés to accompany this aperitif were prepared by Susie and included griddled aubergine rolls, a very simple canapé of red pepper, dill, garlic and sour cream all wrapped up in smoky griddled aubergine. The next canapé was a mini potato cake, similar to a rosti, topped with slices of pan fried duck breast and a blackberry sauce. A delicious mixture of crispy textures and rich meaty flavours cut through with the sharp sauce. Finally were steamed manty dumplings – little morsels filled with pork belly, onion and dill and served with brown butter. 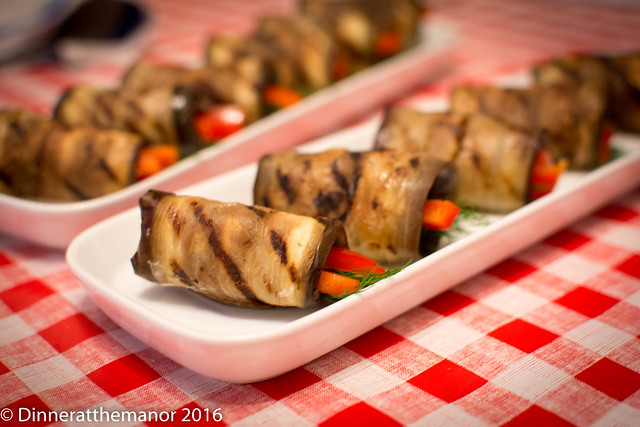 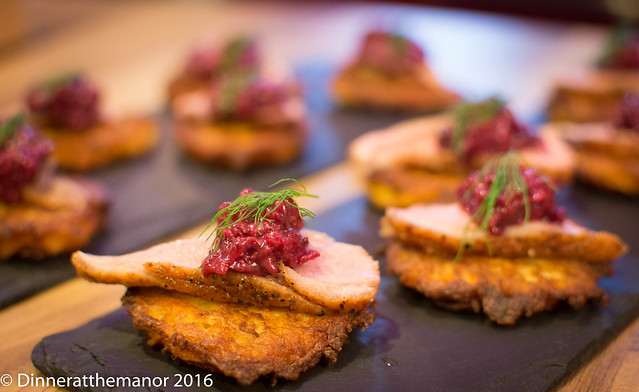 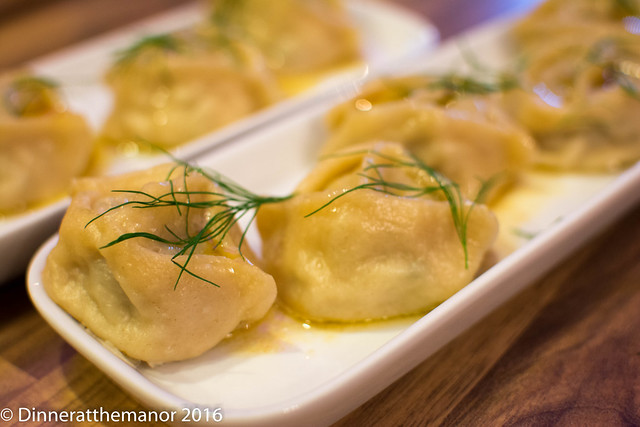 We couldn’t have an Eastern European event without some form of gherkin or pickle and we managed to squeeze this into our starter which was a ‘Russian piquant broth’. This was a sweet, salty and sour soup made with our own light beef stock, tomatoes and the brine from a jar of gherkins. This came spiked with little chunks of gherkin, capers, olives and lemon to add to the piquancy. Slices of spicy sausage added texture and flavour and some veggie goodness came from onion, carrot and mushroom to add some freshness. We poured the broth from vintage teapots in the dining room, which added a touch of theatre. Yummy little stuffed breads accompanied the broth. The milk based dough at the core of these was very pleasant and fun to work with! I stuffed these with potato and shallot and also with egg, spring onion and dill. Served warm, these were soft and comforting – overall a good warming dish for a wintry evening! 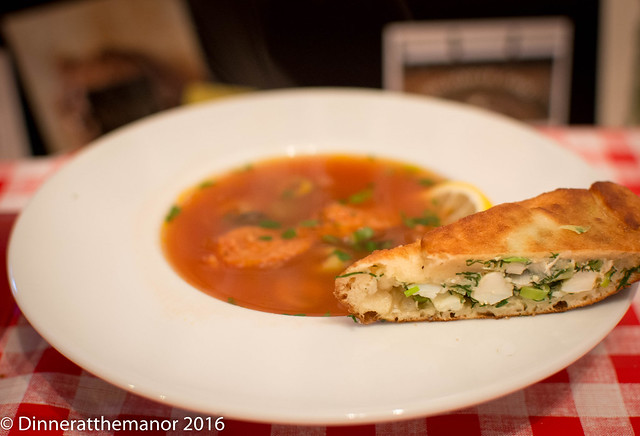 Susie’s main course was an interesting dish of mutton in coriander. The dish originates from Ossetia, a region that is situated across the border of Georgia and Russia. Mutton is marinated overnight in a paste of coriander, dill and parsley and then slow cooked for hours until tender. Green peppers, garlic and more herbs are added at the very end of cooking to bring some fresh flavours to this hearty dish. this was accompanied with a mixed bean salad and “Korean” carrots – a soviet take on kimchi. Both did well to cut through the meaty richness of the mutton. 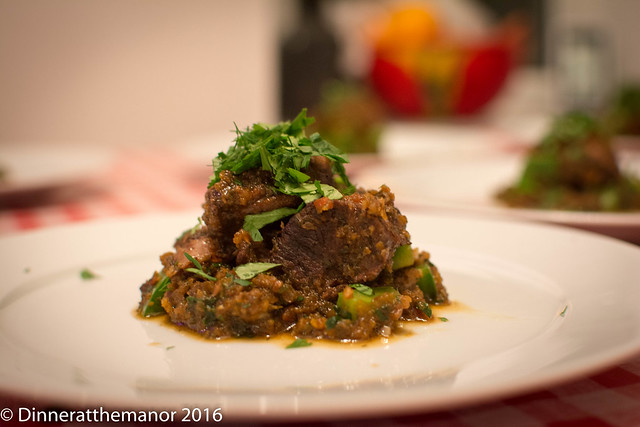 Our sorbet was a classic mixed berry, a salute to the range of berries Olia uses in her book. This was swiftly followed by my dessert of baked cheesecake. Ukrainian cheesecake is a lot firmer and less sweet than we are used to in the West. At its base is a sour fresh cheese called Twarog which can be obtained from Polish delicatessens. I served this with a sweet and sour compote of local forced rhubarb, rhubarb syrup and an ice cream of sour cream and poppyseed. To further brighten the plates up I decorated them with edible flowers – each one had its own unique flavour, some sweet, some sour and some a bit bitter and spicy. 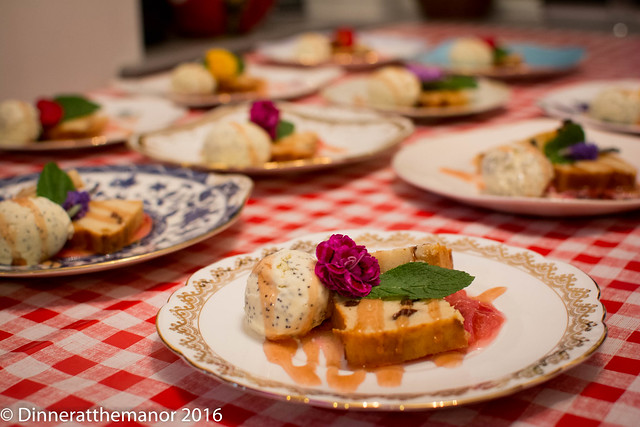 Finally, to join coffees and teas we went out with a choice of two petit four. These included little Ukrainian style biscotti flavoured with walnut and apricot and little fried pastries that were sprinkled with rose sugar and came with a luscious passionfruit curd to dip them in. 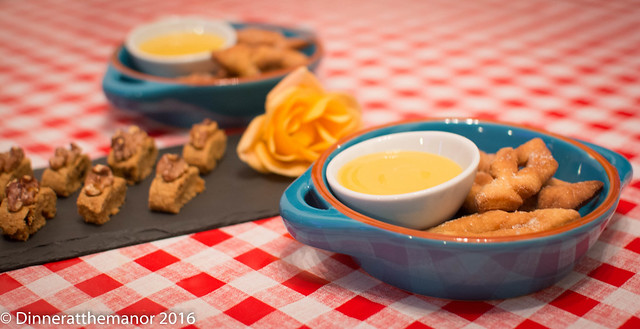 All in all it was a successful night with some lovely guests to feed across the two nights that we hosted. We’ll be back in February for our Latin American lunch, so it will be good to get some spice back into the kitchen! We’re currently booked up until April but in May we’ll be running some events as part of the Leeds Independent Food Festival so keep an eye out on this site and on their’s to find out how to book – our plan will be to hook up with our favourite brewery to provide some beer pairings to the food!

We’re kicking off our 2016 events in just over a week and will be bringing you the delights of Eastern Europe using Olia Hercules’ marvellous book Mamushka as our inspiration.

There will be the usual, traditonal dishes you would expect, dumplings, borscht and dill, lot of dill! But also some surprising dishes that will delight you.

So, here’s the menu, we’re looking forward to serving this up!