One of my surprise favourite books from last year was River Cottage’s homage to veg, which was headed by a healthy eating campaign that saw a very svelte and wholesome Hugh Fearnley Whittingstall appear from nowhere! The book is a lovely one to work with, full of lots of colourful photography, making veg look fun and innovative. We always try and cater for all dietary needs but do like to put a full on veggie event at least once a year. Having said that around only 2 of our 14 guests were official full-time vegetarians, which says a lot for how far veggie food has come in the last 20 years. As a recovering vegetarian myself I eat meat-free often and so putting together a full menu of veggie delights was a pleasure rather than a chore. We also had a gluten-free guest and so, on the whole, tried to pick things that she could eat with the whole group rather than single her out.

Our guests were welcomed with a rustic blackberry mule cocktail. This was a sweet and tangy concoction that included blackberry puree, homemade blackberry vodka, lime juice and ginger beer. Our canapes, rustled up by Susie, included moreish mini potato and swede pasties. These were spiked with tangy mature cheddar cheese and came encased in Susie’s homemade buttery puff pastry. Next up were crostini topped with Cambodian wedding dip which is a bizarre but extremely tasty spread made from mushrooms, coconut milk, spices and peanut butter (amongst other things). It was warm and spicy and extremely comforting to eat. The final canape was a mini cup of parsnip and ginger soup, this was velvety and full of warmth from the ginger.

END_OF_DOCUMENT_TOKEN_TO_BE_REPLACED

Bonsoir! As you may have seen, our next event will have a French theme, where we will be using the wonderful Rachel Khoo as inspiration  I was lucky enough to be in Paris at the beginning February so I took it upon myself to do a little bit of R&D before our March event! Laduree, Pierre Herme and a few other places were ticked off my list and I can’t wait to use some of these sweet ideas next month!

Another thing I wanted to do was attend a Parisian supperclub, but not having  any French conversational skills made me write off the idea, until…

Eight strangers, one table, Paris. Four Brits, six Americans, (two living in London, relocating to LA, two living in the States and two living in Paris) this was truly a global dining experience! Yes, I was lucky enough to be part of an Anglophone, Parisian communal dinner at cult restaurant Verjus!

Run by American couple Braden and Laura, Verjus is a labour of love and passion for food. The child of now defunct secret supperclub the Hidden Kitchen, where Laura and Braden used their supperclub to meet new folk, they took the massive steps to open their own bona fide restaurant.

I had been looking for a restaurant for Nick and I to visit over the weekend in Paris and having learned about Verjus’ story, I immediately wanted to visit. I emailed to reserve a table for two, and to my surprise Laura responded saying that they were holding a communal dinner in their newly refurbished Barnaby Room and would we like to come! A communal dinner? In Paris? If I could’ve bitten Laura’s hand off I would!

Eight courses, with paired wines for €100. A bargain to my mind and waited in anticipation!

The restaurant itself lies in a small passageway overlooking the Theatre du Palais-Royale and inside the dim lit interior was intimate, warm and welcoming and at 8.00pm was already full. Shown upstairs to the private dining room, we were the second guests to arrive. Introductions were made with our dining pals (Them = glamourous US marketing types currently in London, relocating to LA. Us = Less glamourous Yorkshire folk 🙂 ) then we got to look at the menu for the evening… treating ourselves to a glass of champagne as we perused. Needless to say I was salivating…

This was truly a menu which was a clash of different cultures and flavours – harrissa, kimchi, sauerkraut and peanut butter all on one menu? To my mind it made me think of US, and indeed UK culture – it is now a mish mash of flavours. How it should be!

Anyway, I won’t go into a long essay describing each and every course because I don’t actually think I’d be able to do the food justice if I did. You don’t need me to use the words “yum” “nom” over a hundred times! Needless to say the food was stunning. The ingredients we so fresh! Braden later told us that they only work with a handful of regular suppliers and that Verjus basically have to try and adapt their menus depending on whats available to them, which I love.

Highlights for me were the scallops – so soft! The warm egg yolk, the hangar steak and definitely both puddings! The citrus curd was clean, sour and palate cleansing whilst the peanut butter mouse was the equivalent of an all American heart attack. Delicious!

We were even given a surprise unadvertised course – a salad of shaved foie gras, baby spinach, pickled grapes, hazelnuts and shaved crimini mushrooms. A great way of serving such a rich ingredient.

Unfortunately I didn’t take many pictures – as a group we all got on so well that I didn’t want to interrupt the flow of conversation with my flash going off every course! I did manage to take a couple, of the scallops and the peanut butter, which will give you an idea of how beautifully everything was presented. 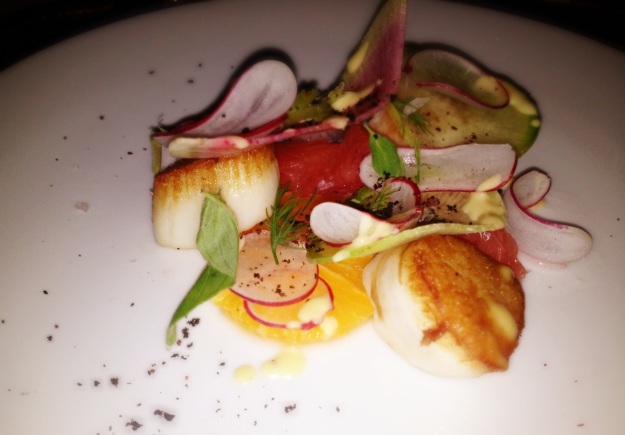 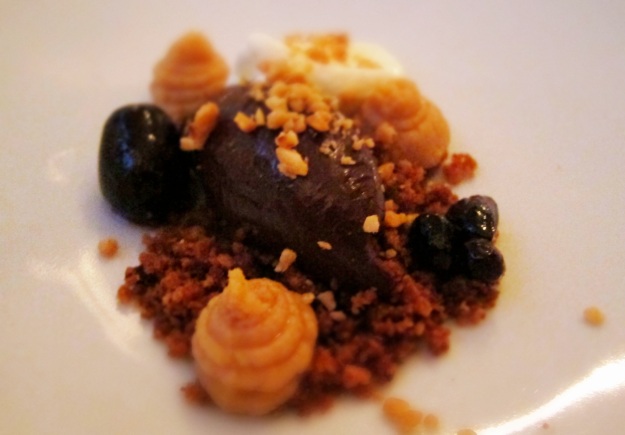 Coffees and petit fours were served (Habanero pate de fruit!) and before we knew it, it was unfortunately time to leave…past 1am! We couldn’t have met the nicest group of people to share an evening in Paris with. It’s a testament to Braden and Laura that they have been able to create such a real “supperclub” feel to their restaurant with these communal dinners. Subjects we all chatted about ranged from the Oscars, football, rugby union (and the nude calendar the French team posed for – who knew!?) and Cats. The food all the while bringing us together.

Conversation at the end of the night turned to meeting up again at Verjus in a year’s time. Will we? Who knows? All I know is that it was a wonderful way to spend an evening in Paris, one I won’t forget in a long time.