Now the excitement of the Leeds Indie Food 2017 ticket release has passed (thanks to all those who’ve booked on!) Here are a few details of the inspired by Ottolenghi event at the Manor the other weekend. I say ‘inspired’ because we messed around with the recipes that much that they probably weren’t that Ottolenghi in the end! The aforementioned chef has re-released his very first cookbook, complete with sexy new front cover. We’ve cooked many an Ottolenghi recipe over the years and whilst we’ve never hosted a supperclub from the his first book, we knew it would be a reliable and rewarding muse. What we’ve come to love Ottolenghi for is his simple approach to cooking – flavour comes first, then colour and then use of the most basic, straightforward cooking techniques so as not to compromise on either.

We started proceedings with canapés of cauliflower fritters and beef tacos. The fritter was soft and comforting, packed full of spice from chilli, cinnamon and cumin. Ottolenghi spikes his with a tart limey yoghurt and I couldn’t resist also dabbing on a mango chutney/ lime pickle combo to create a very flavourful mouthful. The taco was an adaptation of Ottolenghi’s beef fillet with watercress and mustard sauce stuffed in a soft taco! 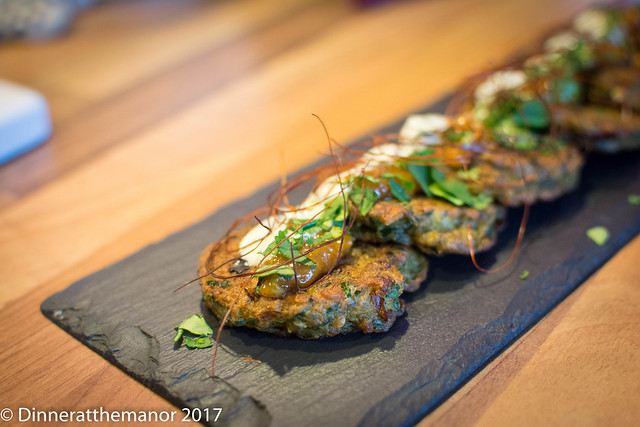 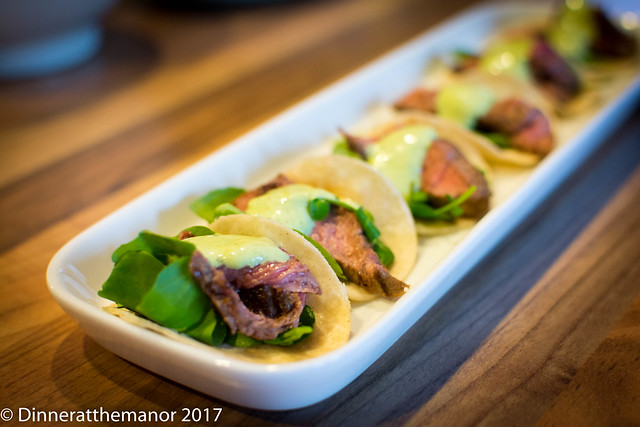 The starters included a seafood and fennel salad and roasted aubergine with saffron yoghurt. The salad was a bit like a seafood slaw, which makes it sound horrible when it absolutely isn’t! Shaved fennel was marinated in sumac, coriander, chilli, dill and lots of lime juice. Fresh baby squid and king prawns were fried in salt and pepper and added to the mix. This was sweet, soft and crunchy – an unexpected taste sensation! The aubergine salad is what many regard as an Ottolenghi classic – his griddled aubergine with saffron yoghurt. Soft smoky aubergine, smothered in floral saffron yoghurt, spiked with basil and pomegranate. 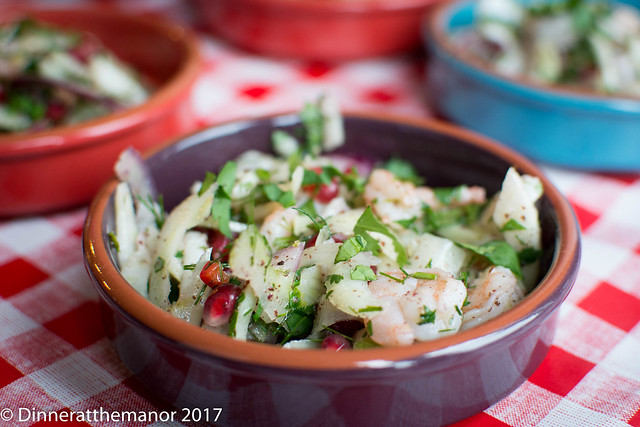 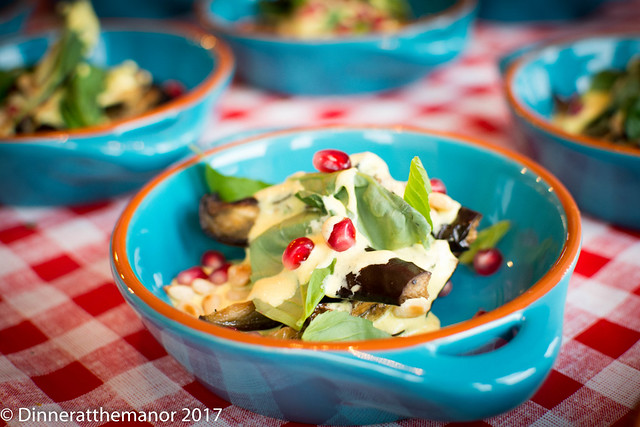 The mains added yet more flavours into the mix and came in the form of a mushroom ragout and harissa spiced chicken. The ragout was not technically an Ottolenghi recipe but was inspired by a cheesy polenta porridge recipe I had spied of his in the Guardian. I wanted something hearty and seasonal to pair with it and stumbled across this top mushroom ragout recipe. A ton of mushrooms were cooked up in tasty sauce of marsala wine and porcini mushrooms and served atop a cornmeal porridge crammed full of parmesan cheese goodness. This was layer after layer of umami tastes and was a big hit in the dining room, perfect for a cold winter’s day. The chicken dish was a wild rice and quinoa salad, topped with harrissa chicken. Chicken thighs were marinated in homemade harissa paste and then roasted and served with the salad. A spicy, fresh affair with the chilli heat of the chicken tempered by the sharp, citrus and sweet elements of the salad. 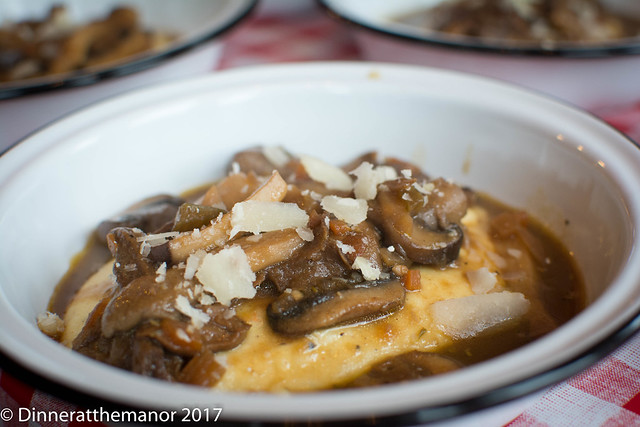 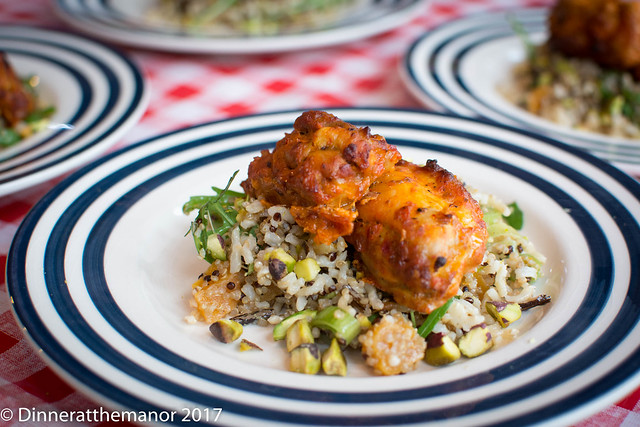 We turned from winter to summer for our dessert which was a bright little clementine polenta cake. Again, not an Ottolenghi recipe as I wanted a cake that was entirely gluten free. These little polenta cakes were topped with a slice of caramelised clementine and even had the whole fruit inside the cake mix. They were doused in a sweet clementine syrup and came with a smear of clementine curd – a celebration of the little citrus fruit! I paired it with an orange blossom, pistachio and honey ice cream – again not an Ottolenghi recipe but actually a Sabrina Ghayour one, so not far off! 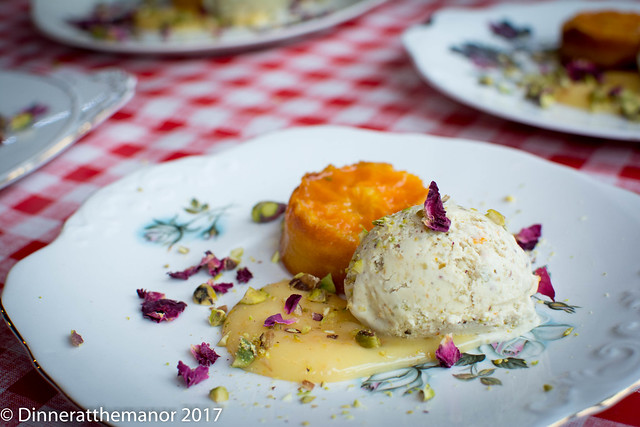 Our final offering with coffees were little almond florentines. Unlike traditional florentines, these were simple, orange zest spiked biscuits that whilst simple in appearance packed a punch. 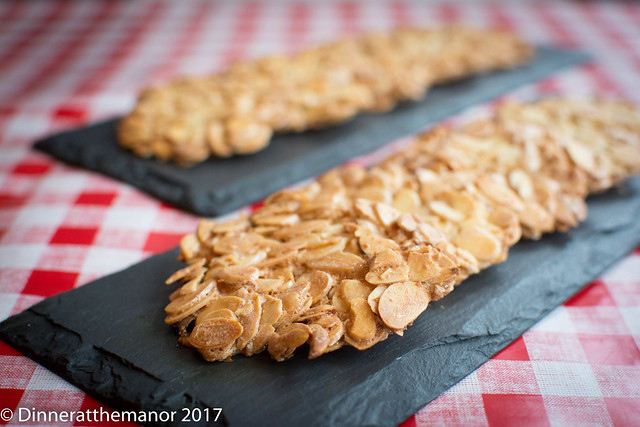 So, whilst we may have strayed a little from our original intention of hosting an Ottolenghi supperclub, I think what it demonstrates is that these days a lot of people are doing Ottolenghi style food and when he first released his original book that was far from the case, which must be a good thing surely?!

Anyway, we’ll be back next in March with another beer and food supperclub which we’re very excited about!

As promised tickets for our May ‘brunch’ supperclubs are now on general sale, and they’re being run as part of Leeds Indie Food 2017.

£25pp will get you a 4 course gourmet brunch, a Leeds Gin Red Snapper and lashings of Yorkshire tea and coffee!

The sittings you can choose from are:

Eagle eyed foodies will have spotted that tickets for our next batch of supperclubs went on priority sale to Leeds Indie Food passport holders this evening. If you’re not a passport holder then fear not, general sale will be 3pm on Thursday 23rd February!

As part of Leeds Indie Food (LIF17) we’re doing something we’ve never done before – brunch! Four sittings, two amateur chefs and one waffle maker! We want to make the supperclub/ underground dining experience as accessible, open and affordable as possible, and we thought some brunch events might just do that.

£25pp will get you a 4 course gourmet brunch, a Leeds Gin Red Snapper and lashings of Yorkshire tea and coffee!

The sittings you can choose from will be:

Whether you’re a seasoned regular or brand new supperclubber you’ll be very welcome, so please do give it a try! It’ll all be served up at our secret location in West Leeds which will be revealed a week before the events.

Watch out on this blog from 3pm on Thursday 23rd February for all the ticket buying links! If in the meantime you want to get a LIF17 passport then you can get one for £10 from here.

We’re already through with January and coming up to our second event of the year! This time we’re lunching and using the reissued version of the Ottolenghi cookbook as our muse. Bold, sunny, spiced flavours to tingle those taste buds.

We’re looking forward to cooking this up, would love to know what you think!