Earlier this week we had the pleasure of being invited to try out the new stallholders at Leeds’ Trinity Kitchen. Now open for about two months Trinity Kitchen has quickly become a go to haunt of ours when we need some cheap but exciting sustenance. Housed in a mahoosive warehouse style space above Boots, this is a part of Trinity that it is easy to miss unless it is a destination in itself.

The concept is a good one. Rather than fall into the trap of a traditional shopping centre food court (McDonalds, Burger King, Harvester, need I say more?) Trinity has gone down the route of a far more trendy offering – streetfood. The majority of the space is given over to fixed traders – Pho, fish and chips, burritos, champagne, cocktails, burgers. Yum. What’s more intriguing though, and which gets us going back each month, is the array of streetfood vendors who set up shop for a month, bringing the outside in.

As a project manager this is a project I would have loved to see in action. Bringing the vendors, who are normally streetbased, into a shopping centre will have been no small feat. From the complex extraction system required, to the bonkers lift that brings their huge vehicles into Trinity, to the accommodation that needs to be secured for vendors not from Leeds. It must have been a nightmare sorting it all out which brings to mind one ingredient that made it all happen – passion. And passion for good food at that.

And so to the vendors. We had a good chat with all of them who were a lovely bunch of foodie folk. It was the first time any of them had set up shop in a  place like Trinity, they had no idea what to expect but between them there was a real party atmosphere. They hailed from all over the country – Leeds, London, Lincolnshire. I’ve heard a few criticisms about Trinity Kitchen in that people feel it should only be local vendors who grace the shopping centre floors. Now I’m all for a bit of localism but if that was the case then Trinity would fast run out of people to host. I think it’s a great way also to be exposed to lots of different food trends from all over the place.

On to the food – we tried to get an array of treats from all of the vendors. First up was Original Fry Up Material who were lovely Yorkshire boys (now London based) serving up fried breakfast themed muffins and burgers. Richard tried their cheeseburger which was beautifully moist and rich. The lads have created a special beer with the Great Yorkshire Brewery, it hadn’t arrived when we were there but we’ll be going back to try it. 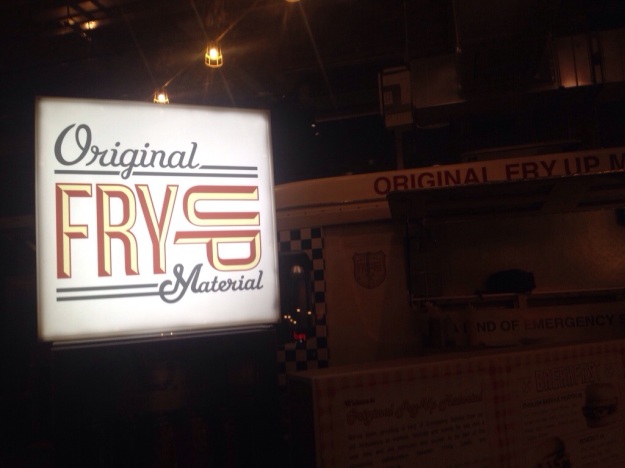 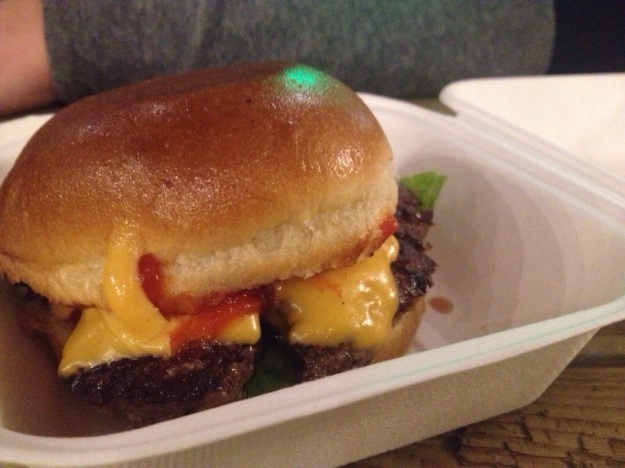 My favourite of the night was Dogtown London, purveyors of gourmet hotdogs, including smoked dogs, veggie dogs and vegan dogs! Made from rare breed pigs (the meat ones that is!) I had the humongous chilli cheese dog. The chilli was sweet and slow cooked with a perfect amount of sizzling spice. I adorned mine with extra smoky chipotle ketchup and piccalilli it was awesome but one of the more expensive options on offer at the kitchen at £8 a pop. Susie had the smoked dog which was huge for its £5 price tag. 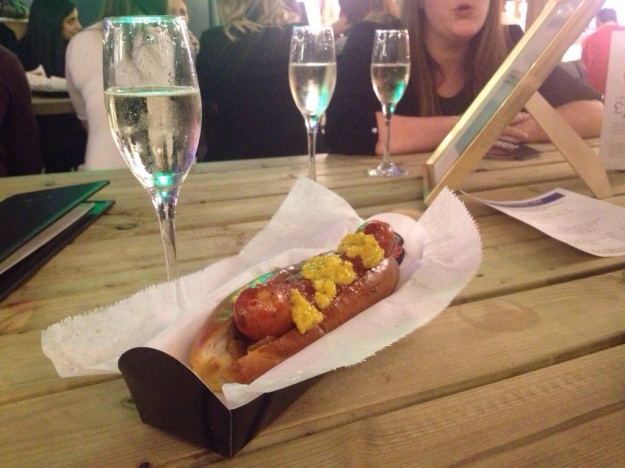 Leeds’ lovely Fish& were in the process of setting up but due to a number of last minute teething problems were not ready to go. This was a shame as I love their unique spin on a British classic. They will also be serving beer when fully functioning.

Perhaps the most unique stall was the Donastia Social Club – a San Sebastian inspired venture (think Basque tapas). This had all manner of mini treats to tempt us. I had a little toast topped with creamy black pudding and a quail egg. Susie had a huge duck slider, full of melt in the mouth slow cooked duck. Bethany had prawns with shallot salsa. Richard had seared scallops with a green chilli sauce. If streetfood makes you think greasy spoon, then you need to think again as this was pure class! I even paired mine with a beautiful glass of amontillado sherry, bliss. 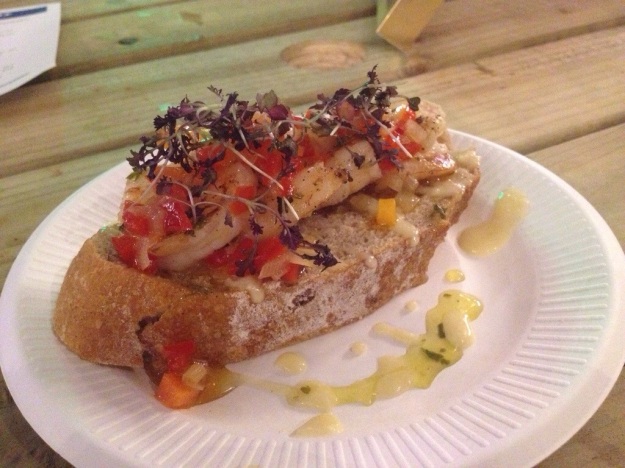 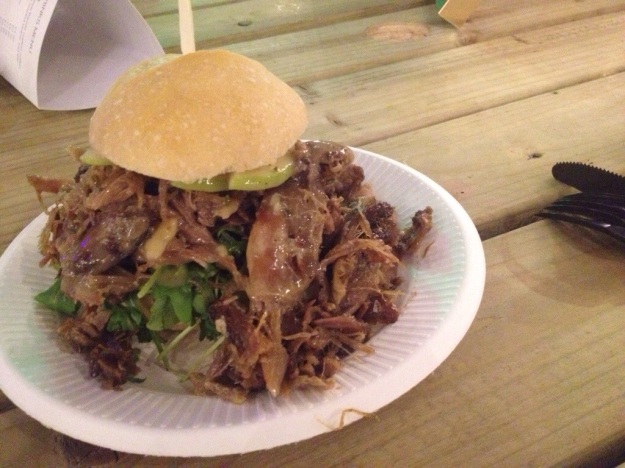 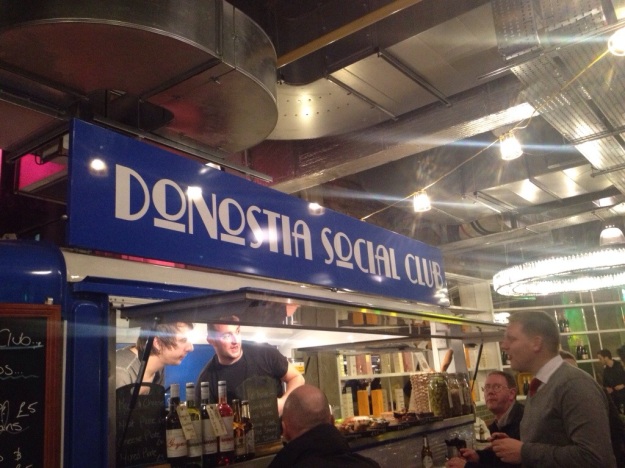 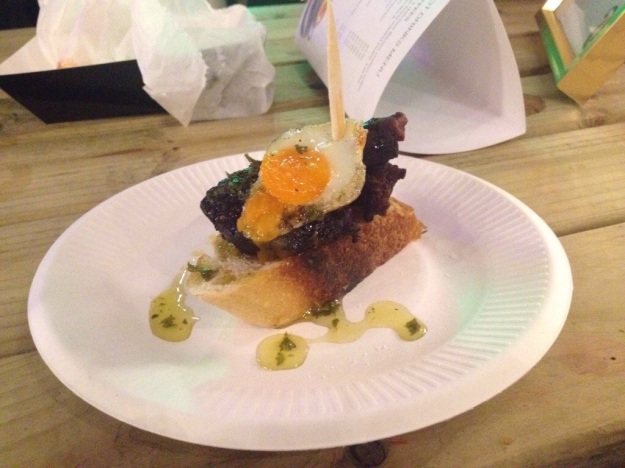 The final offering was crepes by Crepe Lucette, who have created a vintage and crepe fusion serving their wares dressed in fifties clobber and offering up mulled cider in vintage teapots. These ladies were lovely and full of fun. We found the crepe a bit stodgy and lacking seasoning, however it was packed full of filling (we had cheese, ham and chutney) and would be good filling festival fodder we thought.

It will be interesting to see how long this aspect of Trinity Kitchen can last for. We’ll certainly be back to try out each new vendor as they arrive. We did wonder if summer festival season would have an impact on people’s availability. If that happens then we could always start a streetfood van anyway, what do you think?!

Well done to Wendy on turning a great concept into a reality, and thanks for having us!

Wow, it’s that most wonderful time of the year again and we’ve been looking forward to this event since last year! In honour of our Christmas excursion to Copenhagen, we had to do a Scandi themed event to close off 2013. Recommended to us by Nigella herself, we used Trina Hahnemann’s beautiful Scandinavian Christmas book as our guide, along with Signe Johannsen’s Scandilicious series.

Over two cold and blustery nights, our wonderful array of guests we welcomed into the warmth and festivities of the Manor. A soothing mug of Glögg (The Scandi version of mulled wine) warmed our diners a treat before we brought through the canapes. The Glogg extract was a mix of blackcurrant juice and Christmas spices, all boiled down to make a wonderful festive cordial that could be added to red wine and brandy. A perfect winter warmer and less sweet than typical mulled wine.

I created three little morsels to tickle the tastebuds and get our guests into the festive spirit. First off were little endive cups filled with my Scandi version of a Waldorf salad – Apple, celery, walnuts and of course beetroot (lovingly home pickled by Dan). The cups looked like they were filled with bright pink sweets! The flavour was bitter, sharp and sweet, this was indeed a delightful mouthful.

Next up were seared beef crostinis with horseradish cream – my take on what you could find on any Smörgåsbord. The beef was meltingley tender which paired well with the creamy pungent horseradish. END_OF_DOCUMENT_TOKEN_TO_BE_REPLACED

A recent trip to London got me and Susie thinking about which fun restaurants to try out. After much thought it occurred to us that we had never been to any of Ottolenghi’s ventures despite being big fans of his cuisine. And so that is how we found ourselves at Nopi one Sunday afternoon.

Based on the outskirts of Soho, Nopi is unassuming from the outside and full of clean white and luxurious burnished gold on the inside. As we entered and were shown to our table our noses were filled with tons of aromatic and inviting smells.

The menu was fairly straight forward with a range of small dishes (to share as tapas or have as a starter) and about 5 main courses. The small dishes sounded amazing to me so we opted to pick a few to share so that we could try as many things as possible. In terms of drinks, we were still slightly jaded from the night before and so opted for a mocktail (don’t tell anyone!). I had a lush passionfruit juice with kumquat syrup. It came full of bright sunshine colour and tangy, refreshing flavours, I loved it! Susie had a cranberry, apple and cucumber cooler, sour and tangy, with the cucumber adding a note of freshness.