This weekend we’ll be hosting the first of our autumn / winter events at the Manor, and this month we’ll be taking our guests to warmer climes in the shape of our Greek Taverna menu.

Bright, sunny flavours with the usual Manor twists! Take a look at the menu and let us know what you think.

In just over a week we’ll be cooking up a vegetarian feast, inspired by one of our favourite writers and Supperclub queen Sabrina Ghayour, for our guests as part of our fundraiser for Leeds based charity, Zest.

We’ll be taking this event out of the Manor this time too, and will be popping up at a secret location in north Leeds!

Here’s the menu we’ll be cooking up!

Here’s the menu we’ll be serving up to our lovely guests this coming weekend.

We’re going to try and recreate Michelin starred food for this one, from one of our favourite chefs, Simon Rogan. This event will be equal parts scary and exciting and we’re ready for the challenge!

Also, keep your eyes peeled, as we’ll be announcing some new dates soon… 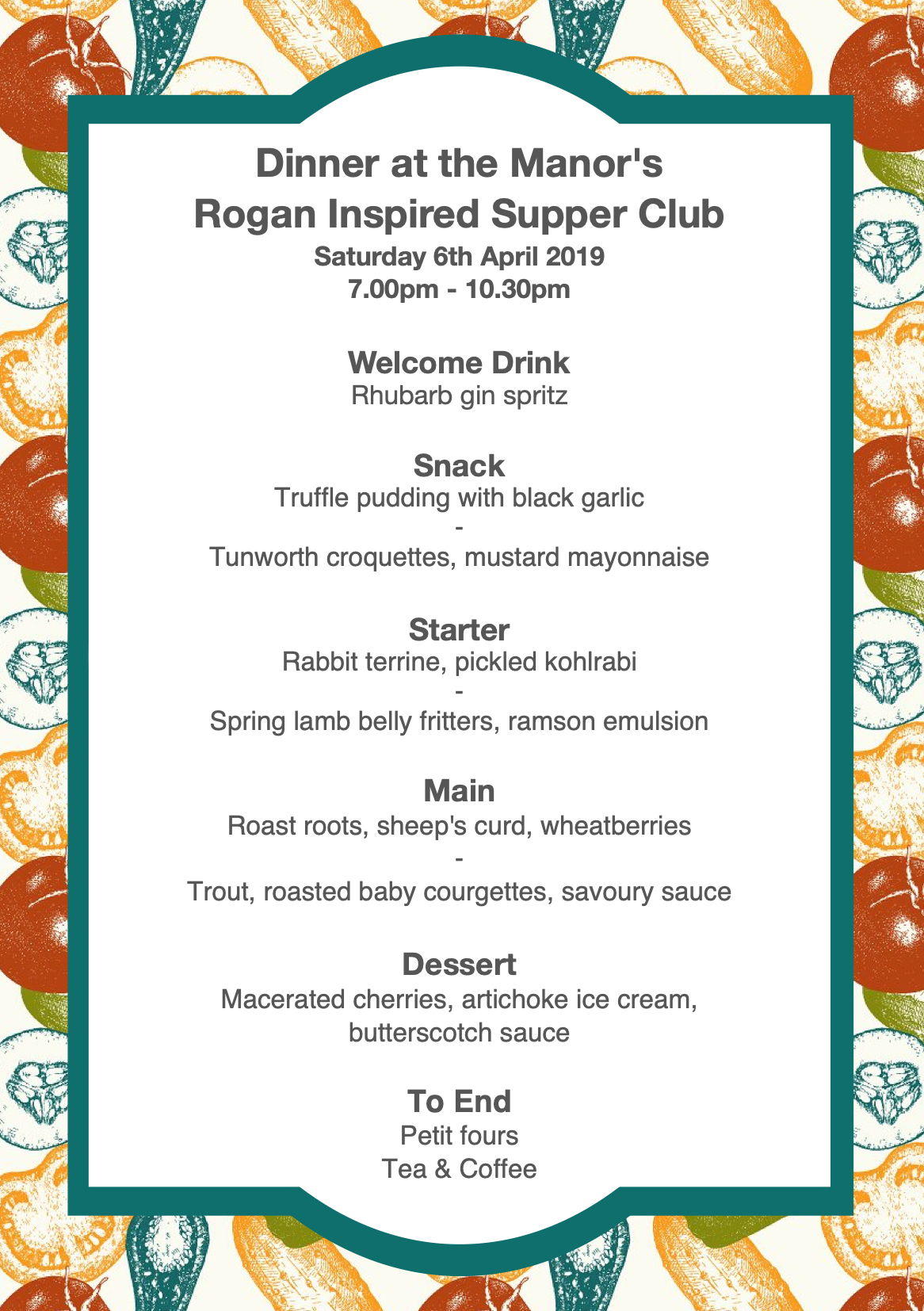 As promised, here are the links you can use to book onto our next run of events

We ventured South this weekend to Sheffield to try out an exciting new supperclub run by Marie from Poppyseed dining. We met Marie and her husband Steve at the Swine that Dines at the start of the summer and were instantly charmed by their passion and interest in food, which meant their supperclub could be nothing more than excellent! Marie has a Bavarian background and upbringing and this is food that I don’t have a lot of experience of and so the thought of lots of warming Alpine treats was exciting, especially in the run up to Autumn!

Poppyseed itself is a small affair with just six guests around the table, but given that Marie does all the sourcing and cooking herself I don’t blame her at all for this. This month’s menu was based around the food they had experienced on their recent holiday in the Italian Gran Paradiso national park. This is right on the Alpine cusp between France and Italy and is not a place I am familiar with but which I’ll certainly look into now. This was Italian food but not as you know it!

On arrival at Marie and Steve’s school conversion home we were greeted with delicious glasses of berry spritz which was homemade berry liqueur topped up with prosecco. This was very light and refreshing. Our canapés included mini puff pastry tarts topped with succulent and salty pork rillettes, which were an absolute porky dream! Also on offer were mini puffs with Marie’s homemade ricotta! I’ve tried to make ricotta before but it doesn’t work with homogenised supermarket milk so Marie must have gone to some effort to source raw milk straight from the farm. Finally we were treated to warm grissini with a salty and herby yoghurt butter with basil. 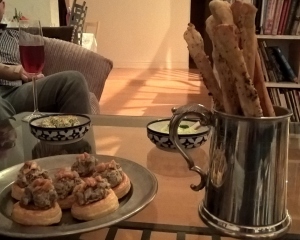 Our fellow guests were very lovely to chat to and had been to Poppyseed before so they were able to explain what the rest of the meal was likely to be like. Our first starter was a lovely little salad of braised figs, hazelnut and lardo brought back from Italy. This was a light and lovely introduction to the flavours of Alpine Italy. The ingredients were simple yet well sourced.

Next up was an intriguing suepa, a new dish to me! This was a cross between a baked bread pudding and a soup, if that makes sense?! Layers of homemade rye bread and fontina cheese were baked in lashings of beef broth. The broth was light and clear and could have been served as a consommé. This was warming and comforting yet over so rich! 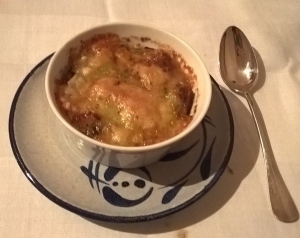 For our main course Marie had cured a lovely piece of beef from Whirlow Farm. This was then slow cooked with red wine and mushrooms and served up with soft polenta and caramelised onions. This dish was a bit more familiar to us. The clever curing of the meat meant it fell apart easily yet was firm at the same time. The sauce was thick and rich and almost sharp from the red wine, helping it to cut through everything. We enjoyed leftovers poured all over rye bread, mmmm! There’s no picture for this as we all dived in and devoured it before it was too late!

After a small break our dessert was a cogne cream which is essentially a rum and chocolate set custard. This was probably my least favourite course as I could have done with a chocolate that was a bit more bitter and a cream that was a bit more alcoholic, as after all the strong flavours of the night this got a bit lost. The star of the dish, however, was a scoop of refreshing pear sorbet on top. I think the pear is often forgotten about so it was good to see it here.

If you dine at Poppyseed do try their coffee. Marie sources unique single bean coffees from a guy in Sheffield who scours the likes of Madagascar and Tanzania for the best coffee plantations. It is some of the best coffee I’ve ever tasted from a cafetiere. Petit four were homemade fruit pastilles that were flavoured with elderberry! These were deep and plummy. The final flourish was a little spoon of honey caramel which was a very light and tasty nougat.

Marie’s passion for sourcing good quality ingredients is very strong and influences her supperclub throughout every single course, from the main event to the little touches such as the canapés and the coffee. This makes it extremely exciting and enjoyable to dine at because you know her heart and soul has been put into absolutely everything. How she can make any money with using such top notch fare is not clear!

For us, Sheffield was not the easiest place to get to and from on a Saturday night without a car, but if you don’t mind driving or can convince someone else to then I do urge that you give Poppyseed a go. You won’t be disappointed by the beautiful ingredients and the warm and friendly hosts!

We’re excited to reveal the first of our summer pop up events – Dinner NOT at the Manor. For one night only we’ll be taking over a Leeds city centre location to bring the glamour, cosiness and great food of the Manor into an exciting new space.

The theme will be Latin American as we want to bring back food from some of our most favourite cook books and cuisines including Mexican and Peruvian – zingy, fresh food for a hot (we hope!) summer’s evening!

What you can expect
The Dinner at the Manor experience turned on its head! We’ll be serving the same top quality food, six courses in all, with an additional welcome cocktail and sweet treats to finish.

Where will it be?
Our venue is a secret for now but is a Leeds city centre location. They are very excited to be working with us and are planning an alcohol flight to accompany the meal. We’ll provide more details of this nearer the time and should you wish to partake then you’ll be able to pre-order from them direct.

Any other Info?
We have 14 spaces round our table, costing £38.00 pp with no booking fees. For our booking terms and conditions please click here.

Book Now – you’ll be taken to our Paypal checkout. Please advise us of any dietary requirements upon booking.

We have some exciting news about our pop up events for the summer following our hiatus from events at the Manor (darn building work!). Dan and I had a very exciting meeting earlier this week and we can now confirm that we’ll be holding a summer pop up in July. 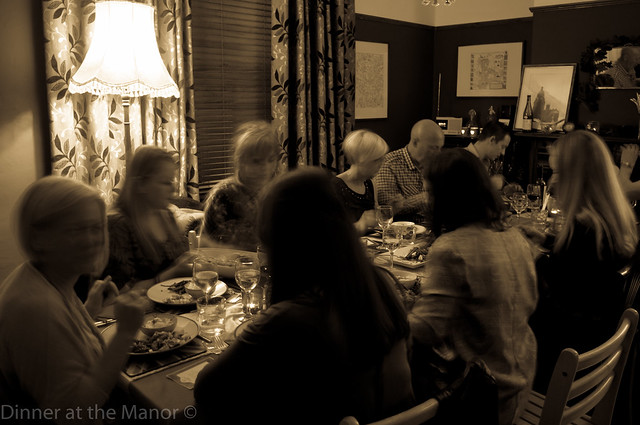 We’ll be announcing more details within the next few days and you’ll be able to bag yourself a ticket for the event next week.

This will be Dinner at the Manor, but not as you know it!