We’ll be opening up our doors as part of the Leeds Indie Food Festival 2016 and will be cooking up a tasty six course dining experience featuring the filthiest but tastiest recipes known to man! Think deep fried pickles, lobster mac n cheese, meaty sliders and sticky, saucy sweets. LIF16 passport holders get a special take home treat, baked by our award winning @stickypinny!

What’s more, we’ve hooked up with Leeds based beer aficionados Northern Monk to bring you three unique craft beers paired to this fabulously filthy fodder. Guests are also invited to BYOB in addition to the beer included in the ticket price.

Ticket price gets you entry, 6 courses, 3 beers, and some extra tasty treats and surprises! Please note that at present only LIF16 passport holders can book tickets to these events. To get a LIF16 passport click here and to book tickets you will need to do this via the official Leeds Indie Food website – our page can be found here. Remaining tickets will be made available to non passport holders at 6pm on Weds 2nd March 2016.

Please let us know of any dietary requirements when you book. Menu and location details will be sent out a week before the event.

This is your ONE WEEK WARNING! We are excited to be part of this year’s Leeds Indie Food – LIF16! This is the popular citywide festival aimed at bringing together a diverse range of foodie events that celebrate Leeds’ vibrant independent food and drink scene. This year it’s running from 12th – 30th May and you can find out more at www.leedsindiefood.co.uk

Our events will be Friday 13th and Saturday 14th May 2016. All will be revealed next week when tickets are released but what we can tell you now is that they’ll be evening supperclub events; we’ll be partnering with a local brewer of delicious craft beer; AND the food will be proper filthy. Lovely!

Tickets will be limited and will be sold via the Leeds Indie Food website. Officially they’ll go on sale at 6pm on Wednesday 2nd March, however we can exclusively reveal that LIF16 passport holders can get priority access from 6pm on Monday 29th February! A passport gets you early access to tickets for all LIF16 events as well as free food and drink. To bag your own passport check out their website.

More to follow soon, but we thought you’d all appreciate the advance heads up to check your diaries and be poised at your computers come next week!

UPDATE – THESE ARE NOW SOLD OUT. Due to a last minute cancellation we are pleased to announce that there are two spaces available for our next event on Saturday 12th March 2016, 12:30pm-3pm. This is a lunch based on Nigel Slater’s latest beautiful book – Kitchen Diaries III. £30pp gets you our classic 8 course tasting menu and a welcome drink. To bag these spaces simply email us on dinneratthemanor@gmail.com and we will let you know how to make payment – first come first served! Please note that these spaces are being sold as a pair.

We brightened up a dreary February lunchtime this weekend by taking our guests on a tour of our favourite Latin American recipes! Sunshine colour and warming spice were the ingredients of the day, inspired by some of our go to cook books, including Martin Morales’ ‘Ceviche’, Thomasina Mier’s ‘Wahaca’ and Kelis’ ‘My Life on a Plate’ (I’m a sucker for a novelty cookbook!).

Guests hurried in from the torrential rain and were greeted with a punchy daiquiri – the classic rum based Cuban cocktail. Usually made with white rum I thought I’d give dark rum a try to create something more warming and spicy. This was shaken with lime juice, sugar syrup and fresh ginger. 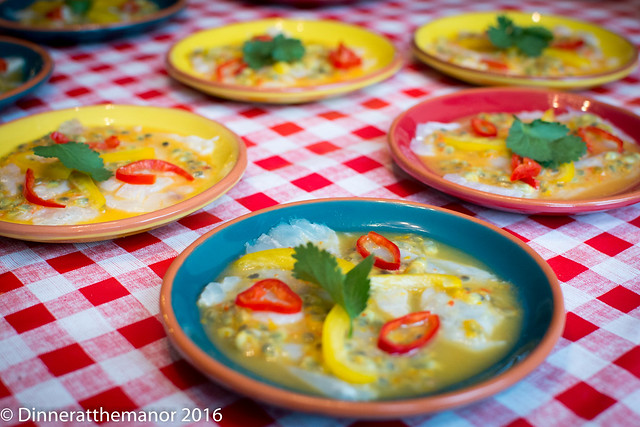 Canapes started with a comforting empanada of sweet potato and chorizo, classic Latin flavours of the soft sweetness of the potato and the spicy sausage all encased in crisp homemade pastry. A real Latin American staple! I followed these with a little corn cake adorned with huancaina sauce. The cake was warm, soft and sweet – the sauce creamy and spicy. I had guests guessing at the bizarre ingredients in the sauce, which included evaporated milk, cream crackers and Amarillo chilli! The sauce on its own can be used as a base for mac and cheese, which I can endorse having had it for my dinner the other night! My homemade Amarillo chilli paste was actually made from scotch bonnets, red and yellow peppers and oranges – a combination which mimics the spicy fruitiness of the Peruvian Amarillo chilli perfectly. 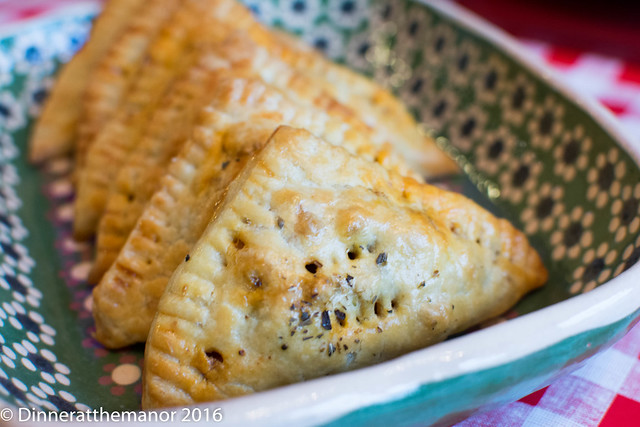 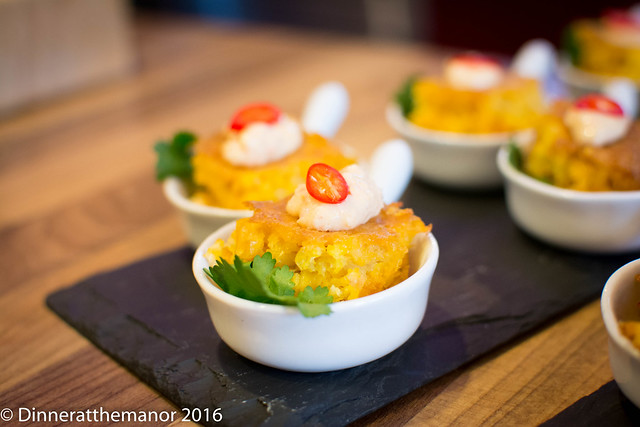 The small plates continued with a beautiful little salad of quinoa, butterbeans and avocado, stacked together in layers, topped with a tomato and onion salsa and served with a physalis sauce. The quinoa itself was understated, lightly flavoured with a little chilli, lime and seasoning, but the sour creamy avocado, salsa and physalis made it all sing. 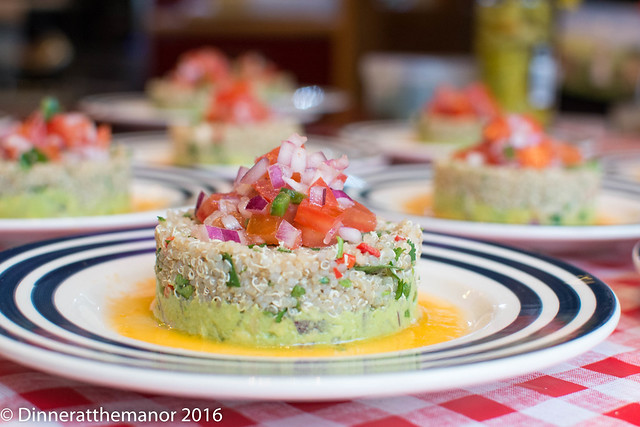 I followed this with a very pretty and refreshing seabass and passionfruit ceviche. Actually a Nigel Slater recipe, this paired delicate seabass flesh with sour passionfruit, lime and fiery chilli. This was a great palate cleanser ahead of the main courses and even got the fish haters licking their plates clean! 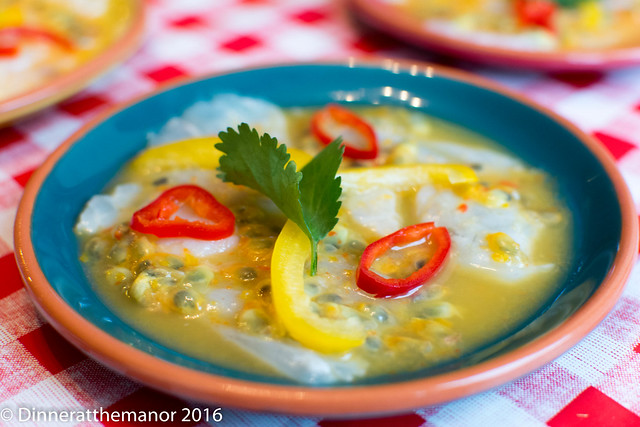 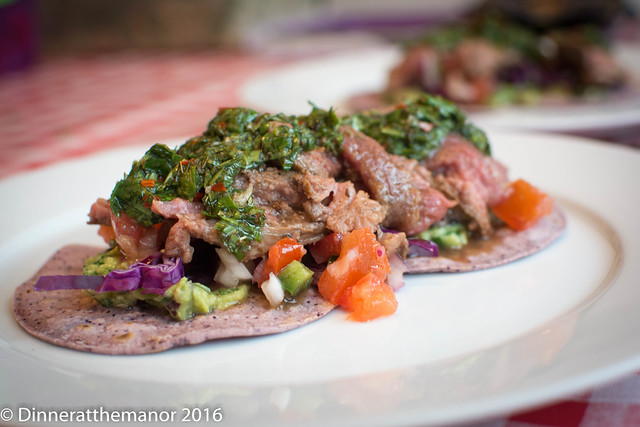 I couldn’t do a Latin American event without some form of slow roast pork. I used Kelis’ Pork Pernil recipe, which is a Puerto Rican slow roast spiced pork. A huge pork shoulder was stabbed all over and had slivers of garlic inserted into it. It was then marinated for 24 hours in a cocktail of herbs and spices that included achiote paste, smoked paprika, rosemary, thyme and oregano. It was slow roasted, on a low setting, for 5-6 hours. I found this very similar to pork pibil if I’m honest. But the soft, tasty meat is always a winner with me. I served the meat on top of a bed of flavourful yellow beans. These were chana masala cooked with bacon, onions, chicken stock and red peppers. Before serving these were spiked with coriander, lime juice and more Amarillo chilli, creating a warming yet refreshing side. These little dishes of awesomeness came anointed with pink pickled onions, pickled chillies and pork scratchings (or carnitas!). 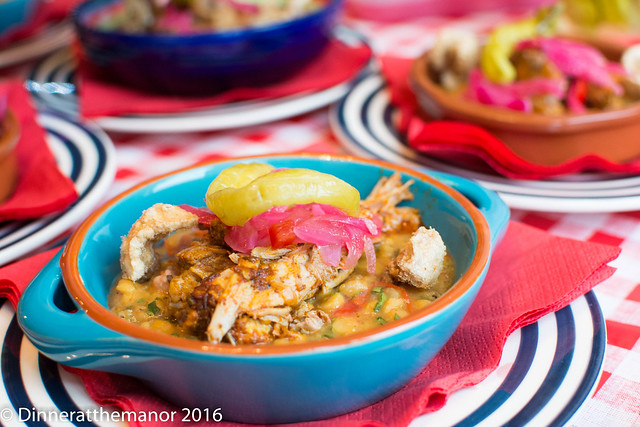 Showing no signs of food fatigue, which is what we like to see, our guests were swiftly moved on to a palate cleanser of pineapple and sage granita – an interesting Latin American and British fusion. Susie’s stunning dessert was a combination of Pastel de Nata (spiced custard tarts), arroz con leche ice cream (rice pudding), chocolate ganache and mango couli. The tart was a crisp case of homemade puff pastry, filled with a thick and rich custard spiked with lemon zest and cinnamon. The ice cream was infused with toasted rice pudding and vanilla – a subtle flavour that really came through. This was all brought together with the rich chocolate and the fruity sweetness of the mango. 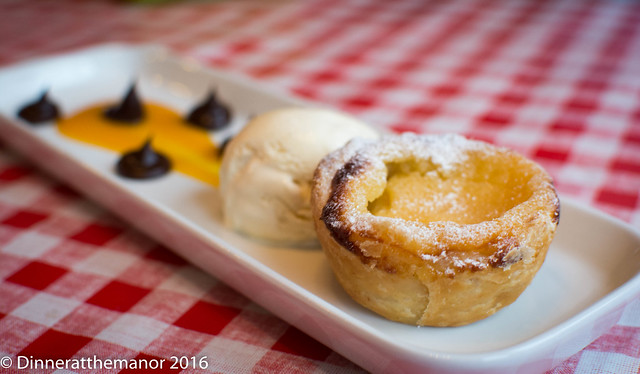 For petit fours I created little sweet potato doughnuts (called picarones). These were lovely and sweet but the dough was very hard to work with and I found the dampness of the sweet potato meant that even after frying the doughnuts were quite dense and doughy. However the sticky rum sauce that these could be dunked into more than made up for that! 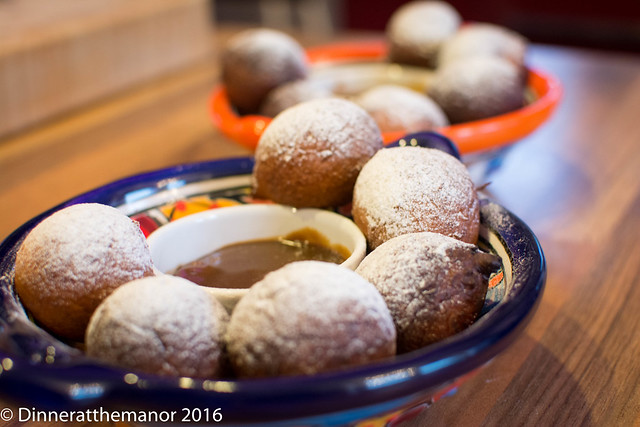 Next month we’ll be offering up more of a British themed lunch for our Nigel Slater Kitchen Diaries III inspired event. It’s a lovely book, so we’re looking forward to reacquainting ourselves with it and picking recipes!