It’s now six years since we started running a secret supperclub in Leeds and each October we like to cook an extra special menu to celebrate. This year we took inspiration from our current favourite chef – Selin Kiazim, of Oklava fame. Selin cooks super modern/fusion Turkish Cypriot food that scored her the winning dessert dish at this year’s Great British Menu. Oklava (named after the rolling pins used to roll out dough and pastry) is her flagship restaurant in Shoreditch and we were keen to bring the lovely flavours of this establishment to Leeds for the weekend.

The Oklava recipe book is lovely – full of flavour and colour that excites you into cooking. Some of the recipes might seem a bit daunting but if you follow Selin’s pragmatic step by step approach then it’s foolproof. Some of the ingredients may seem a bit alien, but if you’re Leeds based then we can’t speak more highly of Holbeck’s Venus Foods – which is an Aladdin’s cave of Turkish and Mediterranean cuisine. You may get a bit lost amongst the shelves but go with a clear list and you won’t be disappointed.

For our welcome cocktail we served up Oklava’s sweet and sour sumac and pomegranate martini. Vodka was infused with bitter sumac and then mixed up with rum, pomegranate tea, pomegranate juice and lime juice. The first canapé was a simple but effective lettuce cup filled with candied walnuts, a dressing made from lemon, honey and feta and a pinch of parmesan cheese. This was sweet and salty at its best. The walnuts are candied whole with their shells (a bit like a pickled walnut but sweet). It creates a musky, maple flavour that is heavenly. 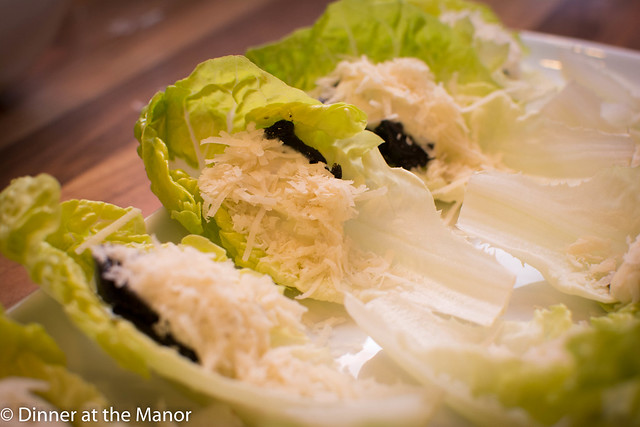 The next canapes were some delightful golden fritters of courgette, mint and halloumi. Crisp, salty and creamy, they were finished of with a dash of chilli and minty yoghurt 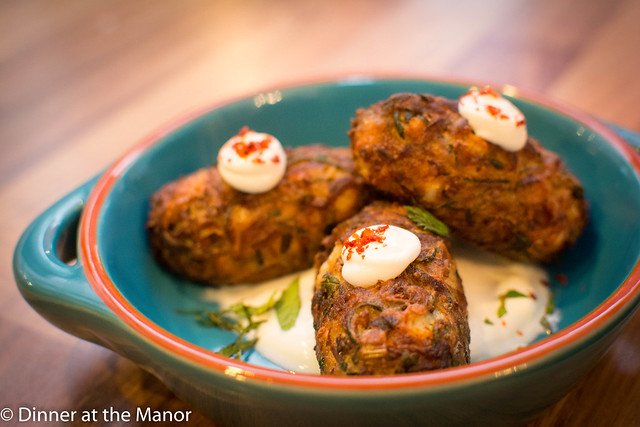 The starters included a pretty salad of sour cherry, pearl barley, chilli butter, yoghurt and kale, topped with sheep’s cheese (in this case pecorino) This unique dish was crispy, creamy and chewy all at once, with sweet, salty and sour notes. 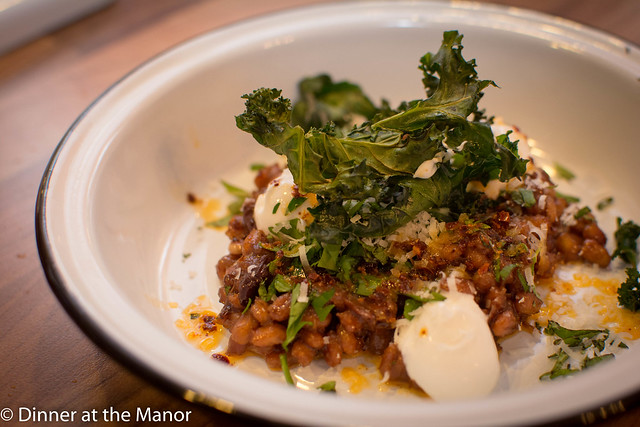 I couldn’t resists cooking up one of Oklava’s pides. When I visited the restaurant earlier this year it was the best thing I ate there, and is possibly the nicest thing I’ve eaten all year. Essentially it’s a folded pizza but with a lovely little peek at what’s inside. I filled mine with a filthy 5 cheese sauce – the cheeses being helim, Parmesan, mozzarella, feta and a Cypriot cheese called Tulum – it’s a stinky, hard cheese that comes in a jar. This was topped with toasted walnuts for crunch and chunks of charred pumpkin and leek that gave a beautiful sweetness against the salty cheeses. These were baked at the highest possible temperature to get the crust nice and crispy. WhatBefore being served they were doused with a  smoky harissa oil and more Tulum cheese. The harissa oil really helped lift the pides from their savoury depths!

The fish course was a beautiful piece of cod anointed with a pretty green crust of sweet pistachio and served with lashings of preserved lemon butter sauce, which was salty, slightly bitter and very naughty! It came atop a bed of buttered freekeh, which was a lovely savoury accompaniment to the sweet fish and creamy sauce. Freekeh is an Egyptian grain that gets dried over open fire, giving it the most incredible smoky flavour. This was cooked with lots of butter, green olives, barberries, chickpeas, pistachios, mint and parsley. 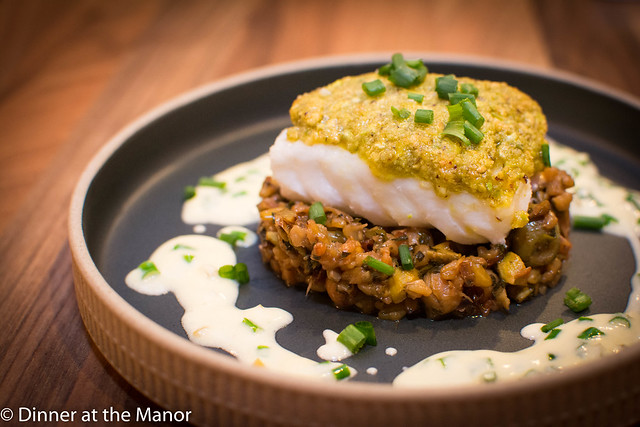 The meat course was a rich ragu of braised beef short ribs in çemen – a turkish spice paste of fenugreek, cumin and paprika. This was served on a rich, thick bread sauce with charred hispy cabbage. To finish this was drizzled with chilli butter and mint jelly to add some acidity. A brilliant spiced, hearty, autumnal dish. 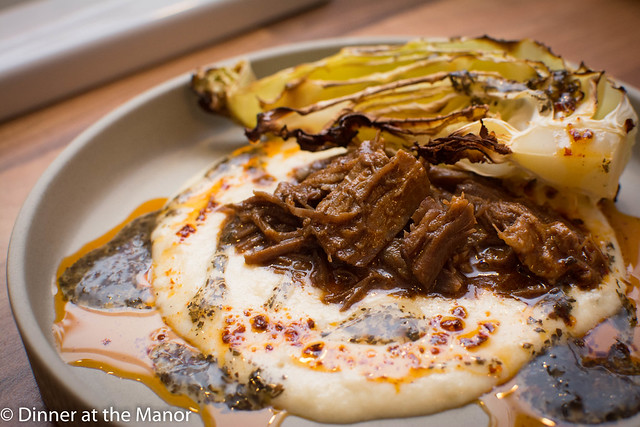 For dessert we took on the challenge of recreating Selin’s famous and award winning dessert – muhallebi and jelly. Muhallebi is a milk pudding thickened with cornflour (or blancmange to you and me!). I flavoured mine with vanilla and pistachio extract. The jelly was flavoured with forest fruits, pomegranate, sumac and rosewater. These were prettily decorated with berries and slivers of pistachio. It was a very ‘soft’ dessert and so to create a bit of texture I threw in a brown butter and almond tuile, courtesy of Ottolenghi’s ‘Sweet’ book. These biscuits had a beautiful crunch that worked perfectly with the creamy, fruity dessert. 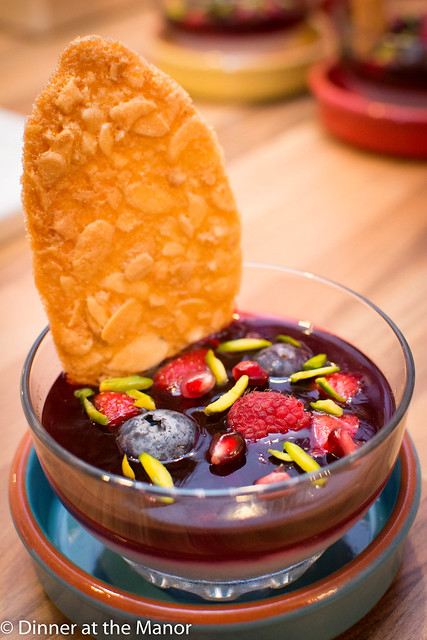 Finally our petit fours were semolina custard boreks. Similar to Baklava in method, these were filo pastries doused in sweet syrup, but filled with a set semolina custard. a sweet way to end the meal. 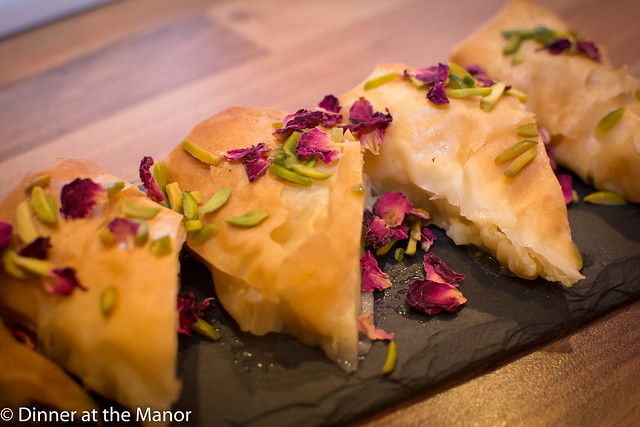 All in all it was a successful event. Usually by the end of a weekend of cooking I am sick of the book we have been using as our inspiration, but this not the case with Oklava, I cannot wait to cook from it again! Next up we have an afternoon tea using Ottolenghi’s ‘Sweet’ as our muse. Given there are no savoury recipes in the whole thing, guests can expect a very sugary affair indeed. I’ve been on a diet the last four months so I’m a bit worried about having to test these recipes!