We turned a fun and fabulous FOUR last weekend, that’s four whole years of supperclubbing for the people in (and around) Leeds, which is pretty good going for a little hobby on the side. With nearly 50 events under our aprons, we’ve served over 600 guests and plated up thousands of plates of food for them!

The theme for this celebration was Nanban, the oddly titled but beautifully presented book by Masterchef Tim Anderson, who won the TV show a few years back with his exciting take on Japanese fusion food. We saw Tim at the BBC Good Food show back in the Spring and were drawn in by his warm and down to Earth approach to food. 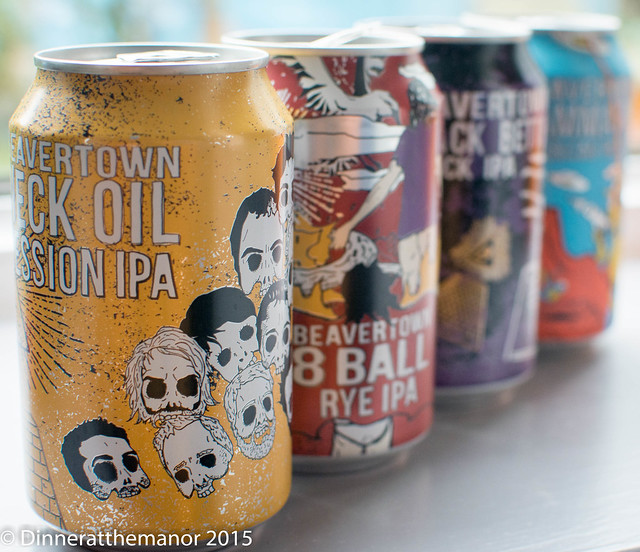 We can never celebrate a birthday without beer. Craft beer is everywhere now, which is nothing to complain about. We chose London based Beavertown Brewery, as they produce some our favourite beers of the moment. Beavertown is run by Robert Plant’s son Logan – a very handsome chap indeed! We love the punchy flavours of Beavertown, which you can sup from a colourful and punky can – very on trend! On offer that night was their staple session IPA Neck Oil – bursting with light grapefruit hoppiness and very refreshing! Also on offer was Gamma Ray – a juicy American pale ale that’s ever so slightly stronger than Neck Oil. The 8 Ball Rye IPA was an even stronger beer (6%) that came packed with rye (funnily enough) to give it a unique dry quality. Finally the Black Betty IPA was a smoky yet light and hoppy beer. We served them all up in a big brown paper bag so that guests could choose when to enjoy them.

Food-wise Nanban doesn’t have a great deal of main course recipes apart from Ramen. So we chose a plethora of small bites that combined to make a meal and which showcased the diversity of the book. Admittedly some weird ingredients were called for, but on the whole they were fairly accessible recipes. If you have this book then I do recommend that you test the recipes which are not always intuitive. 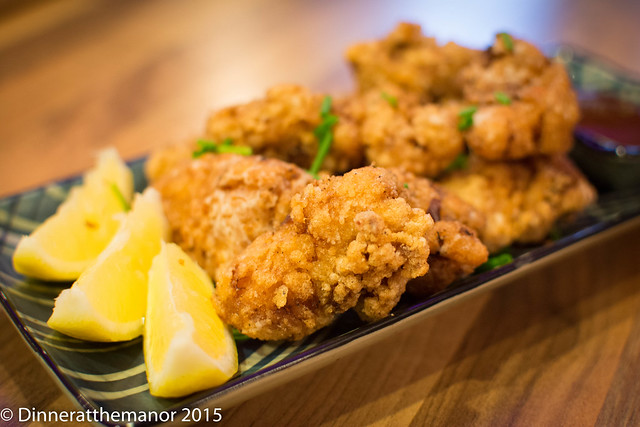 First up was a platter of beautifully crispy JFC (Japanese Fried Chicken or more commonly known as Chicken Karaage). Chicken is marinated overnight in chilli, mirin, soy, yuzu and a number of other ingredients, then dredged in potato starch and deep fried. The result? Juicy, tender chicken nothing like the sort peddled by well known chicken outlets!

This was swiftly followed by the slightly weirder rice yaki. A rice yaki is a pancake come fritter stuffed with cabbage, sushi rice, prawns, scallops, squid and cheese! This is fried in tons of katsu sauce and served with pickled ginger, mayonnaise and fish flakes. Not the most appealing sounding of dishes but comforting nonetheless. It’s basically a Japanese bubble and squeak, using store cupboard staples to bulk out the fish and veg. 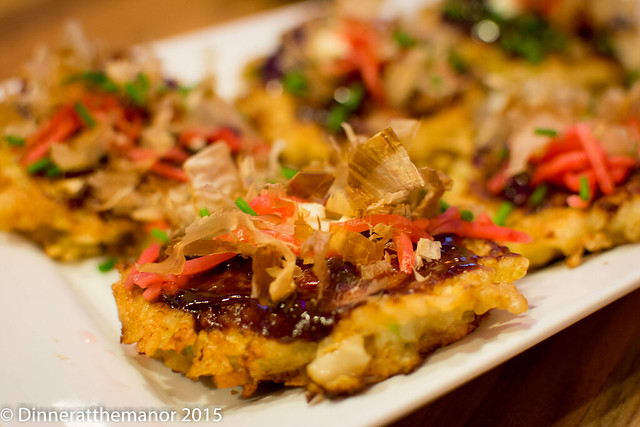 Next up was my take on Tim’s mackerel Scotch egg. Tim’s actual recipe used fresh mackerel with tofu, which made a very sloppy mix indeed. I instead used potato and smoked mackerel which when combined with miso and ginger produced a very soft and tasty jacket for the soft boiled eggs. Guests were served these whole to share, which gave them the joy of cutting open the parcels to release the rivers of golden, runny egg yolk! 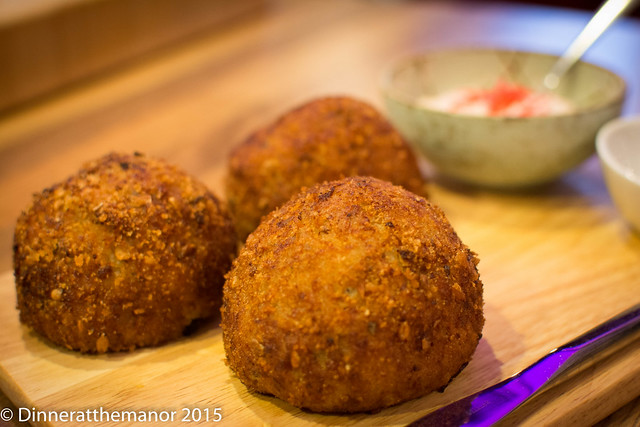 Susie loves a good steamed pork belly bun and the Nanban version of this was very familiar to the ones we’ve made before at previous supperclubs. This time, Susie used Tim’s recipe for Cola Cha Shu. Pork belly is braised for a few hours in Coke, cooled and pressed so that it can be sliced. This is reheated through with hoi sin, stuffed into a steamed, soft pillowy home made bun alongside cucumber, spring onion and sriracha hot sauce. It’s questionable whether these buns are actually Japanese, but they’re tasty nonetheless! 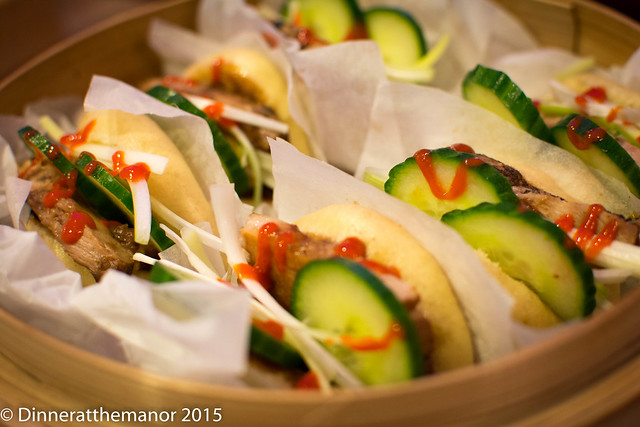 I’ve never made gyoza, the classic Japanese dumpling, and so this was the perfect opportunity to try them out! I made two flavours – a miso pork filling and a sesame veg filling. Both were full of delicious umami flavours and had a lovely combination of soft wrappers and crispy bottoms. I steamed mine in sake which gave a lovely caramelised flavour. A ponsu dipping sauce of soy, yuzu, mirin and rice vinegar was a lovely and sour accompaniment. 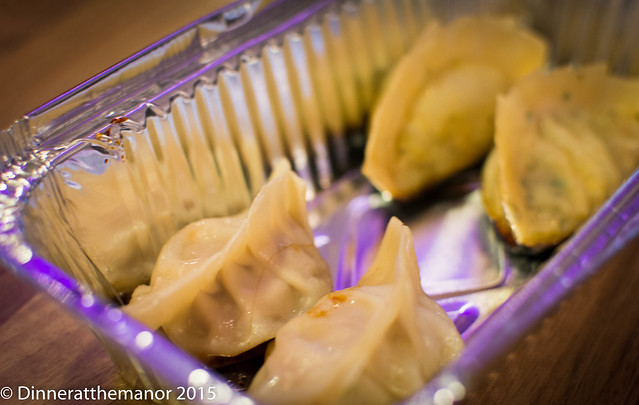 Guests were starting to groan at this point, which we ignored – our mantra at the Manor has always been ‘never knowingly underfed’! To refresh palates and revitalise stomachs we served a vegetable kake-ae. This is a Japanese take on ceviche and Tim’s version had mackerel. I thought we weren’t serving enough vegetables and so did a veggie version. Veg are essentially ‘pickled’ in rice vinegar for a few hours, leaving them crisp and piquant. I used mooli, cucumber, carrot and radish in my selection. Before serving they are drained and mixed with a heavenly sweet miso dressing which is spiked with earthy ground sesame seeds. The dressing is one to remember and which I could imagine poured over fish or white meats, yummy! 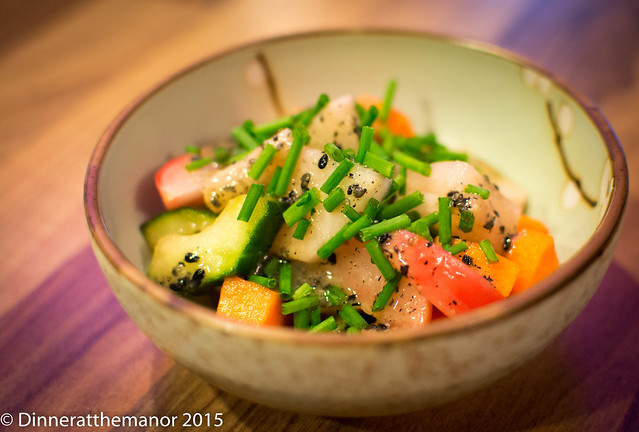 It was over to Susie for Tim’s take on a burger, which thankfully, we served in in minature! The Sasebo sliders we served up are a take on burgers made in, funnily enough Sasebo, which is known as the home of burgers in Japan. Seasoned, beef patties, topped with more Coke cha shu and all the usual burger trimmings, served with “Sasebo sauce”, a Japanese take on thousand island, incorporating chilli miso for an umami kick! 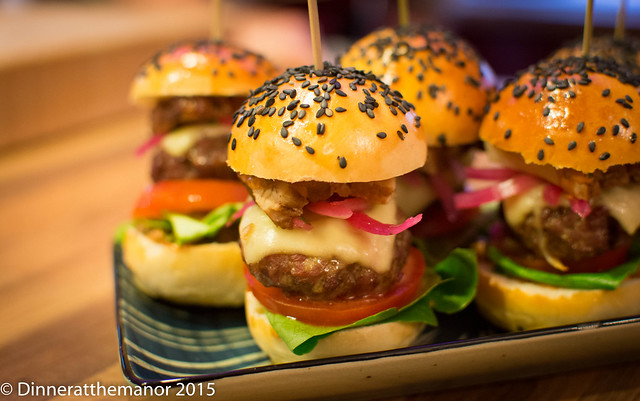 My final flourish was a little skewer of bacon wrapped scallops. These cute little morsels were inspired by the Japanese tradition of eating grilled items in little bars after work, often with a glass of beer or sake. I marinated my skewers in sake for a few hours, grilled them and then brushed with a little spicy miso butter. 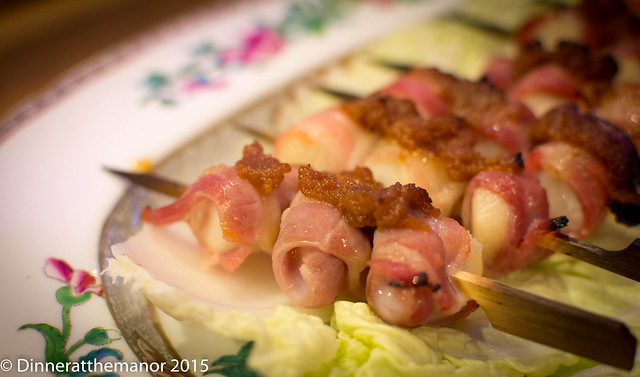 Finally, we put guests out of their misery by serving our last savoury course, a very traditional Japanese dish of Tonkatsu. essentially a pork schnitzel – pork loin steak coated in panko and fried until crispy and golden. This was served with even more katsu sauce and lightly pickled cabbage and sesame to cut through that richness and for some added veg! 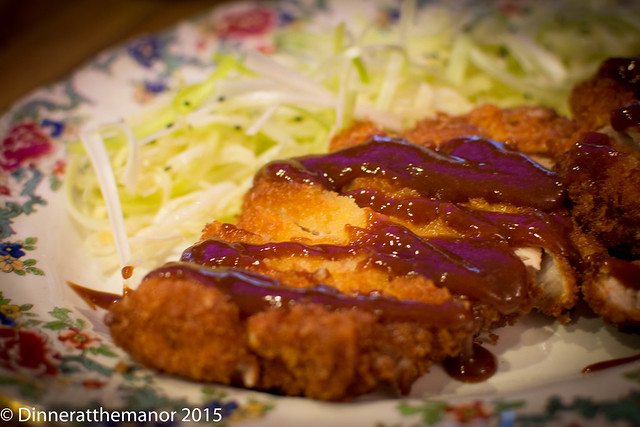 As a prelude to the dessert Susie whipped up a very pretty little sour cherry and green tea sorbet. Morello cherries blitzed in a green tea infused sugar syrup then churned. The sour fruit was but through and balance well with the earthy flavours of the tea.

Dessert options in Naban were not the most inspiring. I opted for the mojiko roll cake – which is basically a pimped swiss roll! The cake batter was spiked with ground black sesame seeds and black charcoal powder, which made it, erm black! This was filled with an uber sweet banana crème pat and strawberries and then rolled up tightly. I served this with a boule of caramel miso whippy san (Mr Whippy, or ice cream to you and me!). This is Tim’s take on salted caramel, which is out of this world with the strangely savoury and musky addition of Miso – super yum! 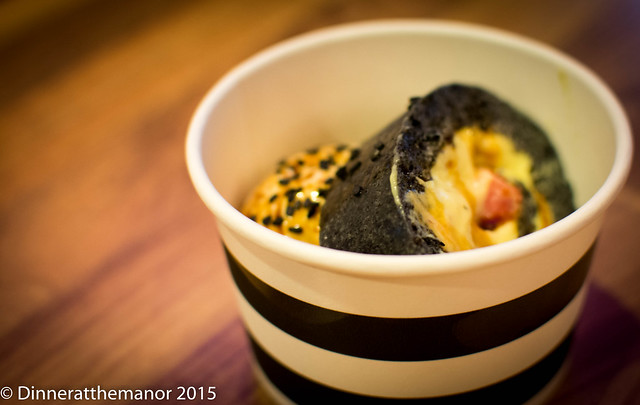 Finally a treat with coffee were Susie’s Matcha marubolos. A cake like cookie, sandwiched with matcha green tea frosting. Very similar to a whoopie pie, but with the cakes including soy sauce and sesame oil, really quite different! These little treats were a perfect end to the meal, not too sweet, with the sesame and green tea dampening some of the sweetness of the frosting. 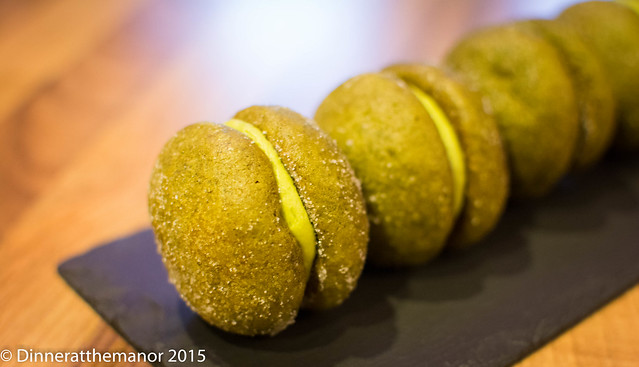 Whilst we feared we had completely over faced our guests with the volume of food the feedback was undeniably positive, which was a relief! If I’m honest I’ll be glad to put away Nanban for a while and the only thing I’ll be rushing back to make (and recommend to you) are the katsu sauce, miso dressing and caramel miso ice cream. The recipes were not foolproof and the strange mix of ingredients were not initially that appealing, but we worked round it! I did also feel that the food we came to recognise Tim for in Masterchef was not overly apparent in this book, which is a shame. Anyway we still had a good time trying them all out!

Next up we have a Middle Eastern afternoon tea and a Nopi inspired festive lunch. There’s been some great new cook books out of late so we’ll be setting our first lot of 2016 dates very soon… We’ll give you good prior warning so you have time to check out if you can come. Tickets to our events would make great Christmas presents!