This weekend saw us celebrate in style for our third birthday, wow time flies! Our little supperclub is now a terrible toddler and growing up fast. We did away with our usual habit of theming the event around a specific cook book and instead based it, selfishly, around our two favourite things – meat and beer, whoo!

The beer was provided by our good friends at Brewdog, who were keen to see how their beer could be used as an ingredient and also how it paired to our food. Susie and I worked with the lovely Russ (Brewdog Northern Sales Manager and general beer geek) to design a meaty menu and pair appropriate beers with it. We wanted a menu that would excite and then fill up our guests with lots of meaty goodness! 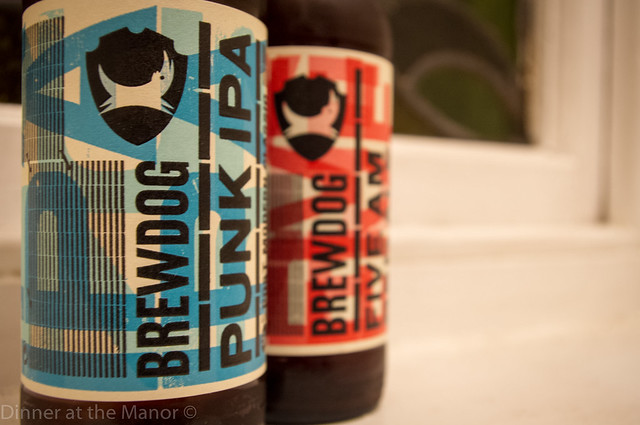 The first beer on arrival was the Dead Pony. At 3.8% it’s Brewdog’s flagship session ale. Not one I’ve ever given much notice to (I don’t get out of bed for anything less than 5%!) However this beer really surprised me. Double hopped, it comes bursting with fruity, refreshing flavour. This is probably the tastiest ‘weak’ beer I’ve ever tried, yum. We thought this would be a nice one to ease guests in with but with lots of exciting flavour to get the taste buds going. We paired this with a little shot of beef and beer onion soup. This was a rich, dark soup made with a stock that included some of the Dead Pony.

Next beer on offer was Punk IPA – the first beer Brewdog ever brewed and their flagship ale. This is a good quality IPA and was a good old rounder for the three street food inspired, handheld, starters that Susie was preparing. Speaking of which, these kicked off with Susie’s chorizo scotch egg madewith her amazing homemade chorizo. Lucky guests got one each! 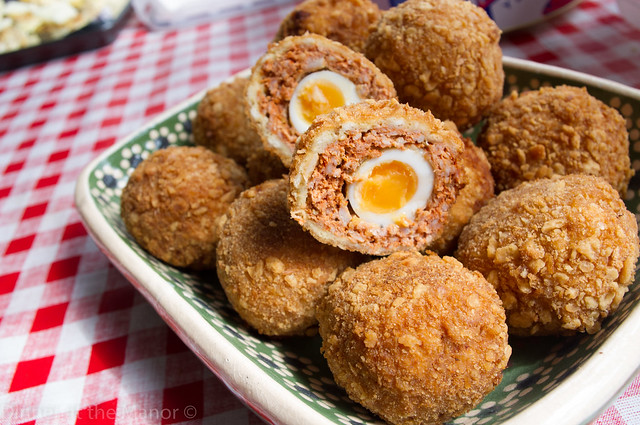 This was swiftly followed by a slider with all the works. A beef and bone marrow pattie was sandwiched in a light and buttery brioche roll and came with all the trimmings such as mustard, cheese, salad and pickles. 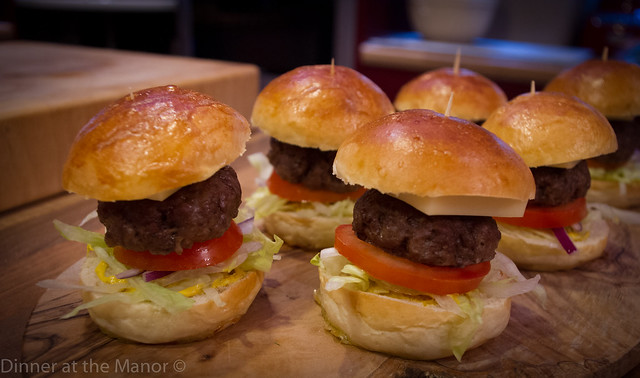 The final flourish on our streetfood themed starters was Susie’s take on bau – steamed buns. Light, fluffy buns came cram packed with tender pork belly, braised for hours in aromatics, then roasted and served with hoisin sauce, carrot and mooli pickle and coriander. I certainly enjoyed polishing off a couple when everyone had gone home! 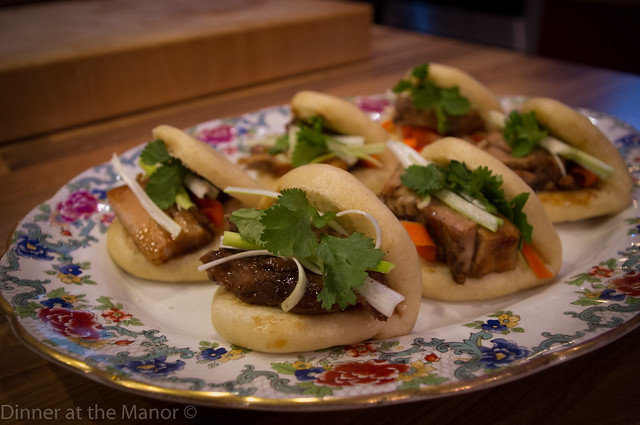 After a little breather it was on to the next beer. This came in the form of Five am red ale. This is a hoppy, malty amber ale, award winning no less. This was paired to our main course which was full of strong and complex flavours. In a mad scientist kind of way I concocted my vision of the ultimate shepherds pie. Not really a supperclub dish I hear you say – well it is when it’s been pimped to the max! Lamb shoulder was marinated in a secret concoction of spices (not really check it out here) and then slow roasted on low for 5 hours. At this point the lamb was literally falling off the bone and so I thought, oh yes, I’ll smoke it! The smoked tender lamb was then bound together in a spicy and vibrant sauce that included some of the five am ale, lamb braising liquor and all sorts of other exciting things. This was topped with a mash spiked with caramelised onions and cheddar. This was umami goodness at its best. Keeping it simple I served it up with cabbage, beans and peas fried in a little butter and bacon, it was a meat event after all! 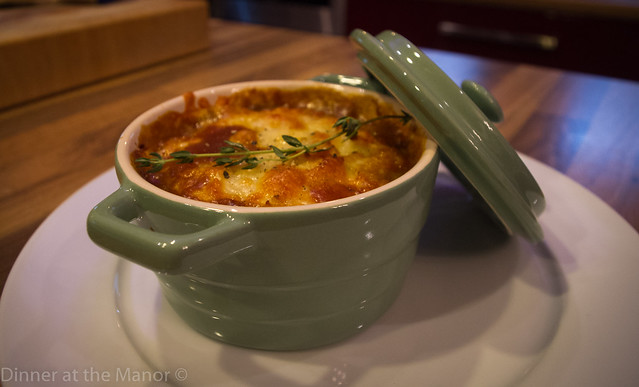 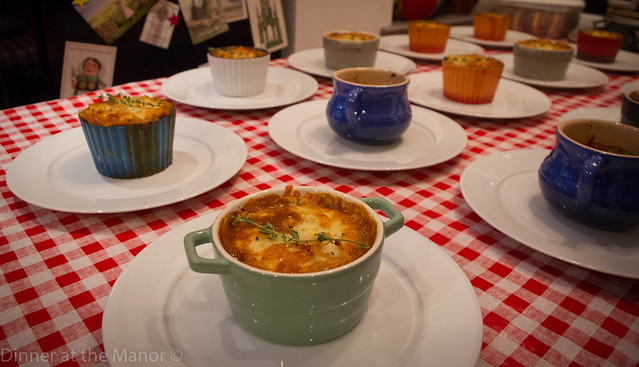 Guests were literally groaning at this point, they were so full! Luckily we had a little shot of real ale  sorbet to refresh them with. The Dead Pony made an appearance again, as the core ingredient of this unusual iced treat. The ale actually made a very tasty sorbet. I found it a little bitter at the end and so added some lemon syrup to turn it into a bit of an iced shandy.

Dessert was a bit of a challenge for us. We agonised for ages about how on earth to get meat in it. But we succeeded! Susie’s been practising her baking recently as part of her GBBO blog series. One of the nicest things (in my opinion) she has made have been her salted caramel honeycomb doughnuts, recipe here! These light, fluffy, indulgent fancies had to make an appearance on our menu (with some leftover for the chefs of course). We buddied the doughnut with a crumb made from honeycomb and candied bacon (yes that’s right) and some ice cream spiked with Riptide, Brewdog’s take on a stout, which was also the beer paired with the dessert. The stout was very intense, full of bitter coffee notes, we thought it would counteract the intense sweetness of the dessert. 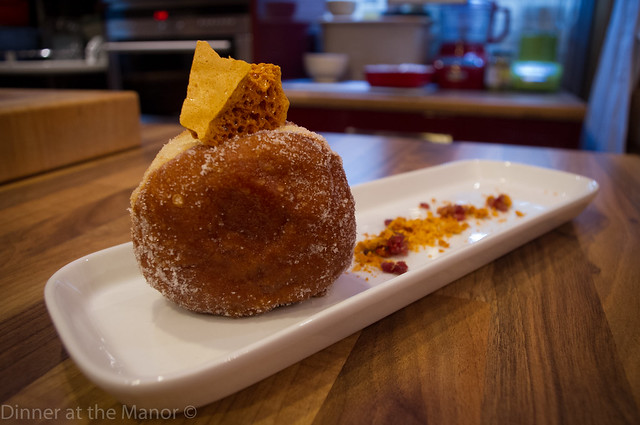 We ended our third birthday with coffees, teas and a shot of AB14. This final beer was almost like a liqueur it was so strong, sweet and flavourful. Think banoffee and you’re almost there! Our petit fours were little gingerbread marshmallows – little spicy pillows that we hoped would revitalise the pallets of our flagging guests! And just when guests thought that they would never want to see any food again, we gave them a Riptide cupcake to take home/ have in the taxi! Our motto is, never knowingly underfed… 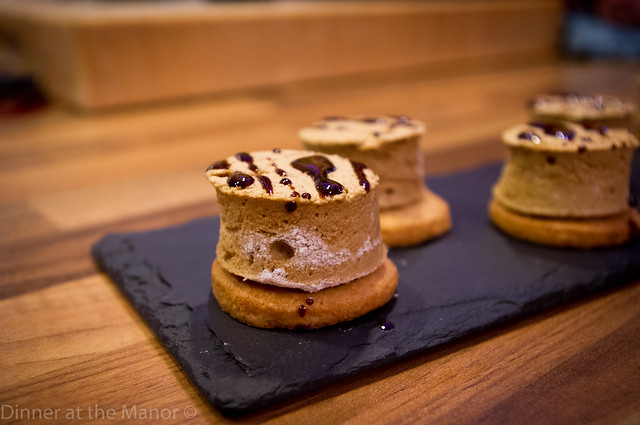 So, what did we learn…. we learnt that you can cook with Brewdog beer, it’s a very versatile ingredient in any course – even sorbet! We learnt that ale is a very good pairing for food, whatever the flavour or style. We loved the Brewdog beers that we got to try but there’s a hell of a lot more out there to try still, so watch this space for future events. We finally learnt that we still love beer and meat, amen.

Fear not though veggies, we haven’t forgotten you! We’re already planning our 2015 dates and these will include our friend Ottonlenghi, phew. A big thank you to Russ and Brewdog for supplying some truly amazing beers, we look forward to working with you again soon!