We brought some Latin sun and flavour to the Manor this weekend. South American food is big business at the moment and we found lots to inspire us from the likes of Thomasina Miers’ hit Wahaca books, Martin Morales’ Ceviche and the huge Latin American food compendium that is Gran Cocina Latina by American Maricel Presilla. So many recipes to choose from that we just decided to cook them all!

Guests were welcomed with a glass of ‘Latin KIss’ a fragrant concoction of aged tequila, homemade elderflower cordial and sparkling water – a light, floral take on a classic Margarita. Nibbles came in the form of crunchy corn kernels flavoured with chilli and lemon, a crunchy delight!

We did away with our classic canapes and starters and instead offered up a series of small plates to give guests a wide range of flavours and taste experiences. First up was a shot of spicy red bean soup inspired by Presilla’s Puerto Rican recipe. I have to say I found her book ever so slightly overwhelming (and no pictures!) but doing the supperclub made me properly trawl through and test things out, which I am glad of. The spicy thick soup was freshened up with a sofrito which is basically a sauce you add at the last minute. Full of freshness from lime, peppers, chillis, coriander and red onion it gives the soup a real fresh bite.

Next up were my favourites- little potato cakes filled with cheese and spring onion and fried in bright orange achiote oil. They were served up with a sweet and spicy peanut mole and fresh salad. Comforting and very moreish! 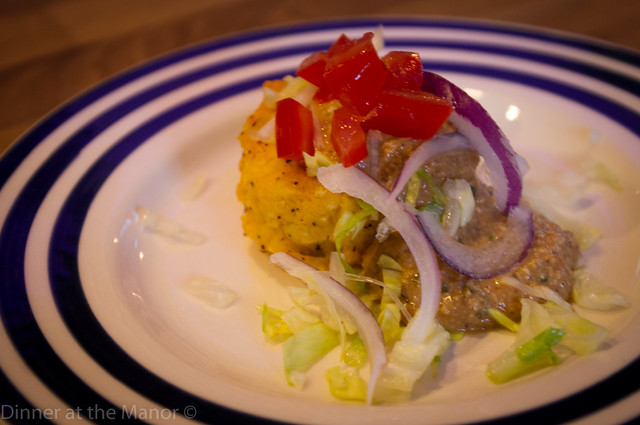 It wouldn’t be a latin American event without a classic empanada. I experimented with two fillings. The first, a veggie option, was sweet potato, black bean and chipotle all bound up in a butter based pastry. The second was beef shin slowly braised in beer, coriander, Amarillo chilli and lime – which you may remember from our Peruvian event earlier this year. This came in a lard based pastry for the meat eaters! Both pastries were lovely to work with – very soft, flexible and compliant! However I felt the butter based pastry gave the best result. The beef filling, for me, was by far the winner – complex flavours of sour heat combined with comforting soft beef, yum! 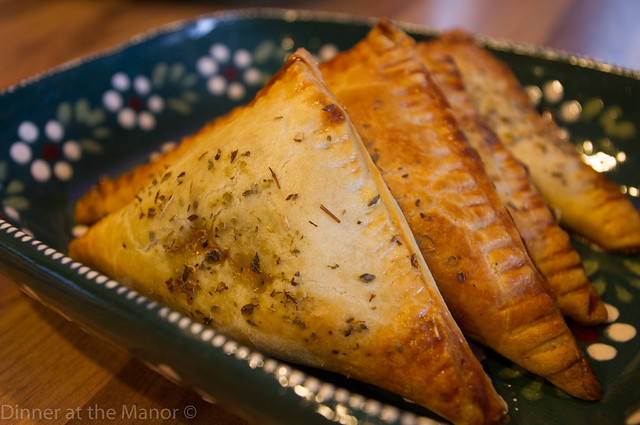 For my next starter I looked to Peru, land of quinoa, for a super healthy but tasty salad. Quinoa was dressed in a uchucuta sauce made from cheese, herbs, corn and Amarillo chilli. I added some sunflower seeds for texture, orange segments for sweetness and dressed the plates with watercress, asparagus and yet more uchucuta sauce. Lots of lovely green in what was quite a brown meal overall! 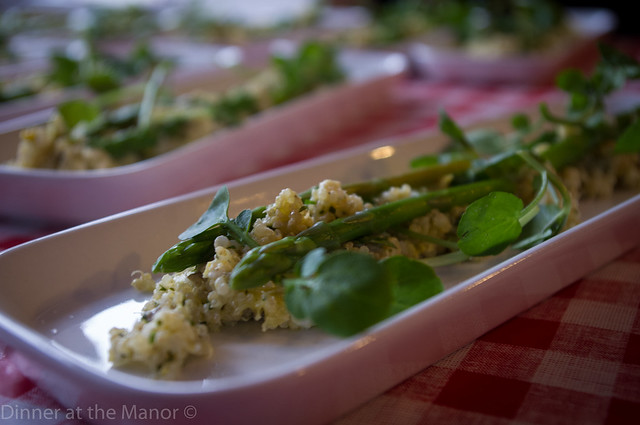 Finally, to freshen up everybody’s palates I put together an intriguing ceviche. Essentially this is raw fish ‘cooked’ in citrus juice that is not everyone’s cup of tea! For the fish phobics I presented a brightly coloured and fresh tasting mango and chilli ceviche. For the more adventurous it was mackerel and gooseberry – two ingredients at their seasonal peak at present. I’ve only made this twice and first time I couldn’t get mackerel, the second time I struggled to get the gooseberries! Anyway oily, flaky fresh mackerel was ‘cooked’ in a tigers milk of lime, Amarillo chilli, orange juice and gooseberry puree. The result is a fresh, fruity, sour, invigorating flavour. It is a most bizarre mouthful which really confuses the brain when you get fruity freshness combined with almost smoky fishiness! 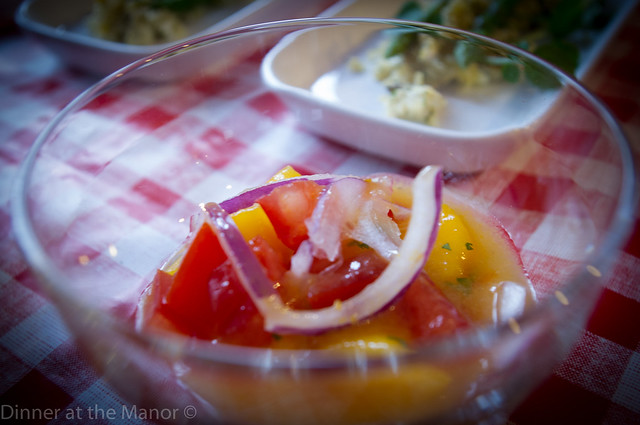 Following a small gap Susie laid on the main event – BEEF! Freshly sourced from Keelham Hall Farm Shop, this was very good beef indeed and got everybody talking. Skirt was the cut of the day, which was flash fried, rested and then thinly sliced. It was dressed in a gorgeously tangy, earthy and firey chimmichurri. Argentinian inspired, this is a marinade that goes onto food after cooking. I really like it as a steak accompaniment as it lets the meat really sing and come to life. The smells coming from the dining room at this point were amazing, and the room went totally silent which is always a good sign. We kept the sides fresh and light given the food enslaught there had been! One of these was a Cuban avocado salad – a bit of a deconstructed guacamole. Secondly was a classic Mexican red rice, spiked with tomatos, garlic and chilli. 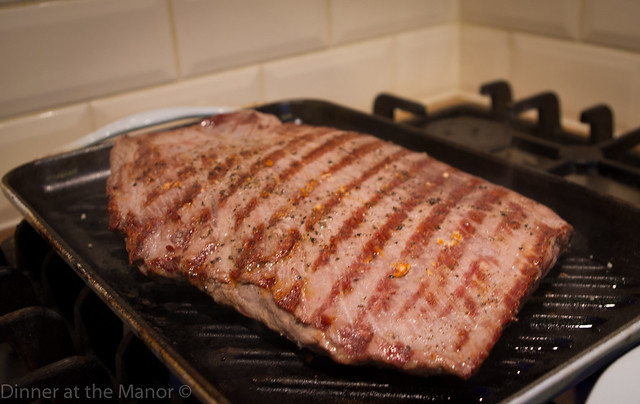 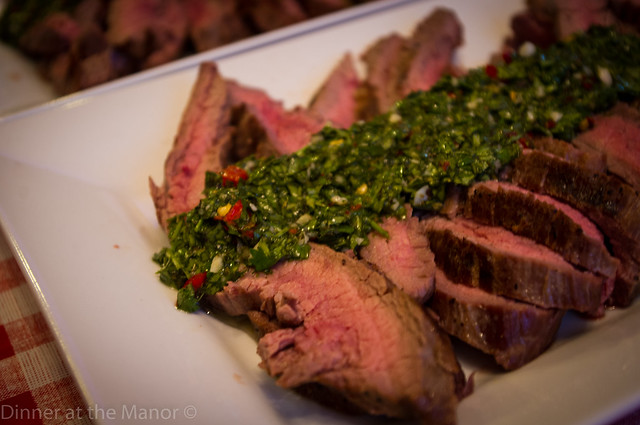 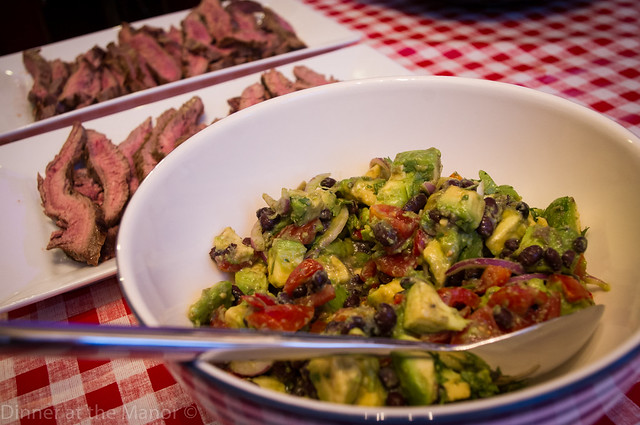 And so now on to the weather… a beautiful, hot summers day, which would have been a delight had we not been sweltering and melting away in an extremely hot kitchen! The dining room was equally balmy and so we offered up some icy mango sorbet to refresh plates and cool people down. Seconds later and the heavens opened with a torrential downpour that lasted until the small hours – not ideal for guests who had come in shorts and sandals!

Dessert was a homage to chocolate, caramel and passion fruit – surely the three best things in the world?! This dainty trio came in the form of a white chocolate and passion fruit mousse topped with dark chocolate mousse. This clever little pud creates its own sauce when the passionfruit syrup collects in the bottom as the mousse sets. This came with a crumbly cinnamon shortbread biscuit sandwiched together with a rich chocolate ganache. Finally it wouldn’t be a Manor celebration without some of our now famous salted caramel ice cream, so full of sugar and salt that it barely sets, particularly on a hot day! Still tastes fit though. 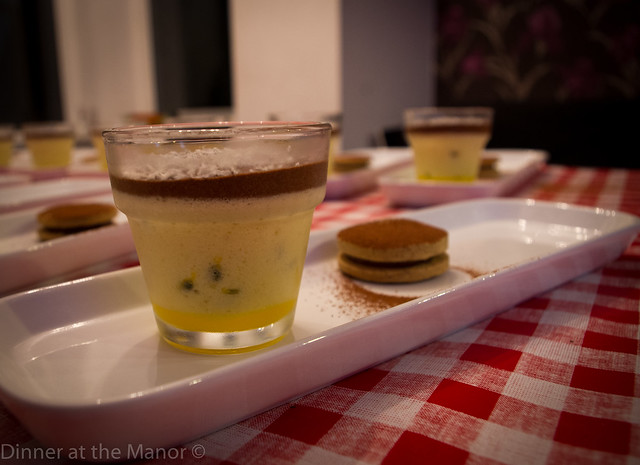 For petit fours I made some marshmallows, which I have been obsessed with making for ages but have always been too scared to do. Want to know the gossip?… They’re dead easy! Yes, admittedly they do involve sugar thermometers, hot syrup and a lot of whisking. But if you can see past that then do give them a go. Mine were mocha flavoured – subtly rippled with coffee and chocolate and dusted with cocoa. They seemed an apt nod to the Aztecs and were perfectly light to finish off such a huge meal! 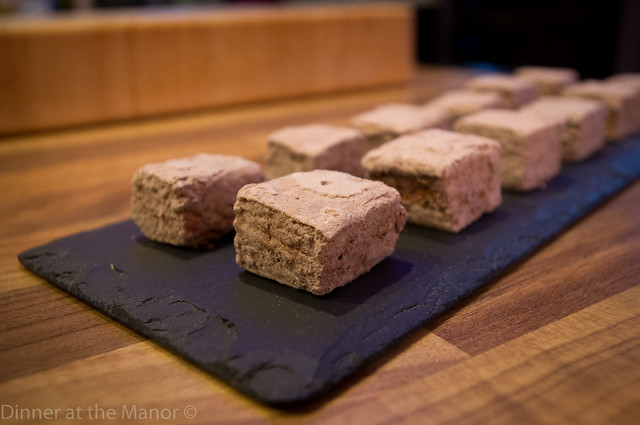 Because we really wanted to finish our guests off, Susie made some delicious take home cupcakes, of the chocolate orange variety. Hope our guests had them for breakfast this morning!

Our guests were mainly newbies which was lovely! We loved talking to Jan from Ambleside who is thinking of setting of her own supperclub venture and we look forward to the invite when it’s launched in the next few months! It was a shame that, for various reasons, there were NO taxis available come home time. It was a lesson to us, and so we’ll ask guests to prebook taxis in future to facilitate an easy night. You’d think that in a city the size of Leeds that transport wouldn’t be an issue, but anyway!

So, all in all it was lovely getting the Manor back together again after a three month break. Renovations are still ongoing so we will be doing some adhoc dinners and teas to fit around this for the rest of the year. Dates will be going up over the coming weeks so keep an eye out. In the meantime if you fancy some delicious cakes, bakes and savouries courtesy of me and Sticky Pinny then why not book onto our Mediterranean Afternoon Tea on August 16th. We still have a couple of spaces left so be quick and grab them!