I have a bit of an obsession with Edinburgh. It’s my top city break destination in the UK, above even London. The mixt of elegant and majestic architecture paired with breath taking natural scenery, chilled out scots and a vibrant food and drink scene make it my undoubted second home. I like to pop up on the East Coast mainline a few times a year. Since the discovery of Gardeners Cottage last year I’ve been looking for a new venue to take the mantle of best new eatery in the Burgh. This comes in the shape of the Scran and Scallie, a pub with restaurant, which is the newest addition to the Stockbridge foodie scene.

The Scran and Scallie is the latest dining (ad)venture from the team behind Edinburgh’s outstanding restaurants The Kitchin and Castle Terrace. In fact The Kitchin was the first ever restaurant review that we did for this fair old site! The Scran has the same ethos as its sister venues – to serve food from nature to plate. And so we expected lots of seasonal Scottish produce with some nose to tail eating thrown in for good measure.

Despite it being a pub one can book ahead, which is reassuring when you’ve travelled a few hundred miles to be there! The outside of the restaurant has been updated, painted in an honest and welcoming grey/blue that reflects the wild and wet weather of Scotland! The restaurant interior is full of nature as well – lots of wood, antlers and wool – reminiscent of a modern Scottish hunting lodge, with a definite splash of Scandinavia. I’d read the menu ahead of our visit and was slightly worried about the prominence of offal and suchlike. I needn’t have worried as my dining partners were up for anything, despite one of them being over 45 minutes late (the restaurant were reassuringly relaxed about this).

We sipped from pint mugs of red cuillin (Skye) as we perused the not extensive menu. This is split into starters, meat mains, veggie items, sides and desserts. For starters two of us opted for the roast bone marrow with parsley and shallot and the other a mackerel ceviche. Once starter orders were in then little baskets of bread with butter descended upon us. The bread was heavy, wholesome and filling. It was lovely but we probably didn’t need it! The marrow came within huge beef bones. These are apparently cut in half by the butcher for the kitchen. They are then soaked in running water overnight to remove the bloodiness. Before serving they are blasted in the hottest oven to roast them to perfection and then drizzled with a gravy that takes three whole days to make! The result is a decadent, rich goo that can be spread on rounds of toast. This felt extremely naughty to eat but the grassy parsley and sharp shallot cut through the fattiness perfectly. I didn’t get to try the ceviche but its presentation was beautiful in its own right.

For our mains we were equally adventurous. I opted for the rich and flavourful calves liver. What I love about calves liver is that you get the lovely creamy texture without the usual iron overkill of typical liver. Having said that it came served with mounds of wilted spinach so there was no danger of me becoming anaemic! My dining partners went for the slow roasted hoggart shoulder, which came as a perfectly round ball of soft, pulled meat atop a beautiful vivid green stew of fresh garden peas. Also on offer was crispy confit duck legs atop a pear barley risotto – amazingly fresh and light. 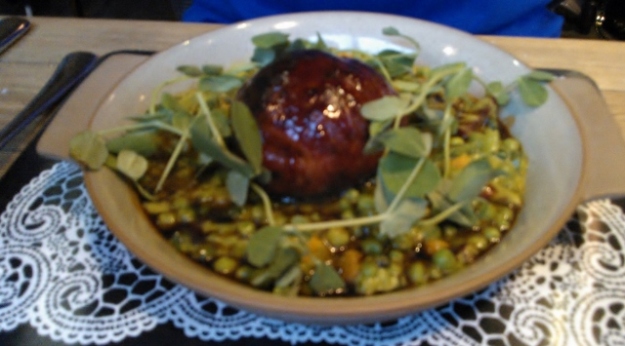 Desserts were obligatory to complete the review. I had a warm chocolate chip cookie with vanilla ice cream. This came served in a cute mini frying pan. It probably wins no awards for complex desserts, however the comforting flavours were much appreciated and it wasn’t too big a portion after a heavy, meaty meal. My partners went for the gooseberry fool – perhaps less fashionable these days but deliciously sharp, creamy and refreshing. 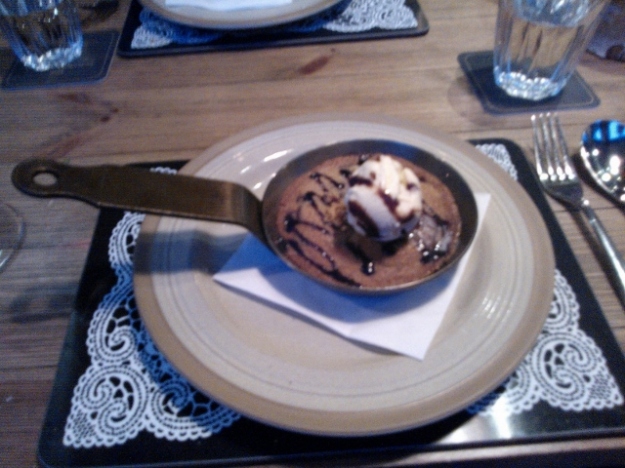 With our food we enjoyed a bottle of tempranillo – a light enough red to suit most of the meals that night. The restaurant’s wine choice was good actually. We opted for one of the cheaper options but felt confident that no choice would have been a bad choice. What’s more, the wines also come in caraffes so you can have whatever volume of wine you desire.

Overall our three course meal with wine, ale and a tip came to £45 each. Perhaps a bit steep for a pub, but given the quality of the food and the surrounds we did not grumble. The Scran and Sallie is an obvious hit for Stockbridge. The place was full the whole time we were there and diners jostled for tables – and this was a random Wednesday! The service was well informed, friendly and appreciated. The atmosphere that is created is one that is relaxed and informal and this is a clever move by the Kitchin team, who already have two formal dining rooms under their belts. I look forward to returning to the Scran and Scallie to watch how the menu evolves with the seasons.

2 thoughts on “Scran and Scallie”