Last weekend was our much anticipated trip to Gusto Italiano, Leeds’ newest and most Italian supperclub! It’s run by (almost) celebrity chef Mario Olianas (of ITV’s British Best Dish fame) who is well known for his appearances at farmers markets across the city. He has now moved into the world of dining clubs where he serves up gutsy feasts using age-old family recipes. Mario is Sardinian and came to Leeds as a lad, fell in love with his partner and never left! His passion is for homemade produce and locally sourced meats straight from the farmer.

Mario had attended our July event and had warned us not to eat too much before coming to his. We arrived at the secret location absolutely starving! I won’t say too much about the venue other than that it took us all by surprise and was a very grand and British way to enjoy a delicious Italian feast.

We were welcomed with a delightfully fresh and dry cocktail of prosecco with strawberries. Ushered into the ornate dining room we were the first to arrive and so got first pick of the seating arrangements. The large table was adorned with Italian bread, snap breads, olives, pickled onions and pickled mushrooms and artichokes – all of which we presumed were handmade by Mario. Guests filtered through with a mixture of excitement and nerves and Mario made us all feel at ease by bringing us more and more food. First up was a tomato bruschetta – very simple, colourful and full of summer flavour. Thinking that this was the starter we were then all shocked when Mario and his partner Sonia brought out armfuls of Italian cured meats and cheeses. These were artfully displayed on beautiful hollowed out tree trunks as platters. The cheeses were particularly scrummy and included Mario’s own Yorkshire pecorino which was soft and creamy. I was in my element with this course and we all agreed that we’d be quite happy just grazing on antipasti all night. I think this is what his taste evenings at Macys will be like – so check them out if you can! 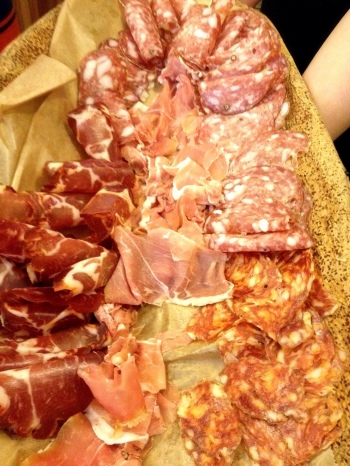 Full to the brim with meat and cheese we were given a mini break before Mario’s homemade gnocchi were brought out. This Sardinian version is a fairly substantial pasta made with just flour and water (no egg or potato). They had a great bite to them and came served with a simple sauce of tomato, basil and ewe’s cheese. Mario explained that the key to Sardinian cooking is to serve food simply so that you can appreciate each individual ingredient being used. He also explained that Sardinians eat a lot of food but over a long period of time, which he was trying to emulate for our evening! The gnocchi was indeed beautiful and I liked that I could taste the fresh tomato and torn basil – but I ate far too much and almost scuppered my attempts at eating the main course!

The bit we were looking forward to the most was the promise of roast suckling pig (cooked at just 6 weeks old!) and side of lamb. Again, these came out on Mario’s wonderful platters and were passed round for us to dig in. The piglet was moist and light tasting. The crackling was incredibly thin and crunchy but not salty like its English counterpart. The lamb was beautifully pink and well seasoned – I only managed a small mouthful though! They came served with golden roast potatoes – the goose fat and rosemary they were roasted in made them especially rich and naughty. To counteract this were crudities of carrot, lettuce and celeriac, which were nicely fresh against the rich meat. Sonia later explained that Sardinians don’t really do vegetables that much.

Dessert was a Sardinian classic tiramisu, which contained no cream but was still surprisingly creamy. I soldiered on and wolfed it down despite being full to capacity. It was a very good Italian way to end such a feast! Mario takes great pride in his coffee and next proudly brought out trays of espresso that were courtesy of his industrial looking machine! I opted for a deliciously perfumed homemade mint tea to aid my digestion. At this point Mario and Sonia, having worked hard all night, were able to relax with us over a glass of aniseedy grappa. It was great to get to know them some more and find out about their passion for real food. Mario is a very humble chap and perhaps doesn’t quite appreciate the talent he has for pulling together such delicious feasts. A great example of this is that the majority of the guests round the table were his regular market customers who were keen to try out his wares in person!

All in all we had a lovely, greedy evening and I’m now excited about trying one of his Italian taste evenings, so that we can have more of the yummy antipasti!